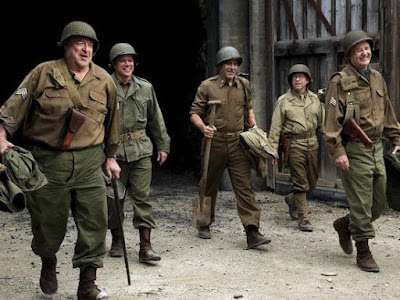 On paper, every single thing about this film should work.  I mean, first of all THAT CAST, right?  I mean who saw that lineup and thought, well they'll probably manage to misfire?  The answer is no one.  However, there were warning signs that this one might not be the home run that most in the audience were hoping it would be.  As soon as it was delayed, due to "tone issues", and put out of the awards running, granted a February release, I was worried.  I mean the last time a February release saw anything promising, it was, what 1991, with Silence of the Lambs?
They were right to be concerned about the tone issues.  This is a movie of contradictions.  This is a war movie populated by comedy veterans.  It's a human interest story that doesn't really take the time to invest in humanity, and it's a big-budget film that's difficult to pinpoint where that budget went...although, it probably comes back to, well, that cast.  My main problem with Monuments Men is that it is entirely reliant on its built-in audience and doesn't seem to feel like it has to try at all as a cohesive film.  They know that most of us see "Bill Murray" or "George Clooney" or "Matt Damon" or heck, maybe you're a huge "Bob Balaban" fan (I'm certainly not judging you) and you say, "sure I'm in, let's see this". And unfortunately what you get in the film is exactly "Bill Murray" or "George Clooney" or "Matt Damon".  I couldn't tell you any of their characters' names and you know, what, I don't think that was the point of this film.  And that's a problem.  Because in order to tell a great story, you have to be able to put something beyond pen to paper.  There has to be more than an an actor, there has to be a character.  While there were some opportunities in the film for emotional investment, it never takes full advantage of them, because our investment in the characters is minimal.  Cate Blanchett is, perhaps, the exception, but she feels like she's in a different movie.  The fact that her storyline is actually removed from the battlefields does nothing but add to that sense of distance between tones.  This was clearly a film that wanted to have its cake and eat it too, and while the story itself is very intriguing, I can't help but feeling that a documentary about this mission, perhaps narrated by this great group of actors, would have been far more engaging than this disjointed fictionalization.