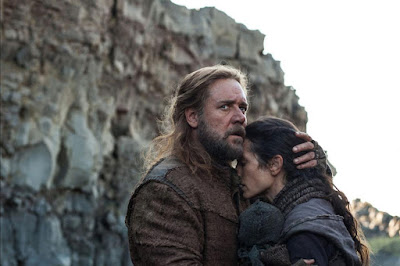 I just need to state up front, that I personally have a 2 "things" about Darren Aronofsky films and the explanation of  those "things"are as follows:
Thing 1-If you're a fan of capital-F Film, you really HAVE to see his movies.  They're filled with visuals that manage a duality that few directors can rival. Even when they're stripped down films like The Wrestler, they're both stark and lush at the same time.  His stories always walk a tightrope of fairy tale and reality, and that combination of escapism and intellect is indeed a kind of addiction when it comes to this guy.
Thing 2- You really only need to see his movies once.  Usually those same attributes that draw the viewer in are so strong that one viewing is enough to leave it imprinted on your brain for years to come.  I mean honestly, if I just write the title Requiem for a Dream is there any person who has seen that movie who can't conjure at least one startling image that instantly brings back that viewing experience?  They're daunting, sometimes even antagonistic, movies that care little about appealing to the masses, and care a lot about being conversation starters post-view.
Aronofsky specializes in powerful images and flawed morality tales, and, in that vein, it makes sense that his next passion project was Noah.  However, the other side of that coin is, "wait this is 2014, right?" and perhaps Noah, as was true of the man in the tale, is a story out of sync with its time.
There are probably many people familiar with the tale of Noah, as he is a figure that appears in many of the major monotheistic religions, in one way or another. According to Aronofsky's vision, as well as various texts, Noah was the last of the Patriarchs before the Flood that wipes out humanity.  Noah believes that he has the gift of vision and that God speaks to him through this gift.  Through one of these visions Noah interprets that God has burdened him with the task of building an arc and saving the animals in order to start the world anew once a flood washes away all the dire results of Adam and Eve's Original Sin. In other words, Noah is a chosen one, and like most characters shackled with this fate, life instantly becomes more difficult once this task is assigned.  In order to build the Ark in relative peace & quiet (I mean, let's face facts, a boat the size of the Empire State Building is BOUND to draw some notice, it's not like you can really get a zoning permit) Noah moves his family out to the Biblical version of the country.  His new location just happens to be surrounded by mythical stone transformers.  They used to be angels, as far I could tell, but now, that fickle omnipotent power has forced them to serve out some time on Earth.  These fallen angels protect Noah and his family from the crazed, Bacchanalian,man-tribe led by Ray Winstone's Tubal-cain.


And so, the stage is set for an interpretation of the rest of the Genesis tale.  The tribes of men clash with Noah in a desperate attempt at salvation, Noah sets sail and then watches as his best laid plans seem to be drowned out, and just as the drama reaches its climax, land appears, offering what Noah believes was promised; the chance for humanity to begin again.
What is fascinating about this choice of material is that it is so blatantly controversial, and yet, after seeing the film, I wonder exactly what audience members may not have responded to. I say "may not have responded to" because there were reports that test audiences had issues with early cuts of the film, in addition to the film's modest, at best, box office showing (To Date: its gross still has not overtaken its budget).  Having not seen those cuts, I can only imagine that most of those reactions were as a result of whatever baggage each viewer brought in to those (mostly) targeted test screenings.  It's impossible to ignore the religious aspect of a film based on a story that appears in many religious texts, but Aronofsky seems to, successfully, shift the focus more towards Noah's inner turmoil and familial clashes than about the overwhelming presence of an unseen being.  However, in my experience,  when religion enters in to the equation at all, the worst thing anyone (at least here in the U.S.) can be is be unbiased.  Most people don't want balanced, they want a clear case of US v. THEM and when they don't get it, they respond negatively.  I would imagine most of those test audiences weren't paying attention to what they were seeing, as much as they were paying attention to what they BELIEVED they were going to see or what they wanted to see. I mean I suppose even the fact that I'll use the word "evolution" in this piece would be enough to set some peoples' teeth on edge, but as has been well-documented by people for generations, most notably, Rick Nelson "you can't please everyone".
As far as what Aronofsky has put on screen though, I have to say the visuals are worth the price of admission.  Watching the evolution of Earth on the big screen is an all-encompassing sensory experience and while the color palette is decidedly naturalistic (mostly greens, greys, and browns) there's a tactile element thrown in that really adds to the experience.  Seeing it in the cinema, there was a sense of a grand scale of the surroundings and the sets that I think was beautifully paired with what is, at its heart, a very intimate story of a man struggling with a terrible decision.  I think what this movie does successfully address is just how difficult a decision that would be.  It brings the humanity back to a story that is often glossed over as "and then it ended with a white dove".  But it's a story of sacrifice, jealousy,  Thinking about it, even now, I find it almost humorous that the most controversial subject matter that Aronofsky has tackled, thus far, is almost banal, although colorful, in its structure. It contains beautiful production design, but there is less of a visceral impact with this film than I'd say I experienced with his previous work.  Ultimately, I think it's a very worthy inclusion in Aronofsky's filmography, but I think it will be mostly appreciated by people already familiar with his work.  If you're seeing it because of "Noah" you may be ultimately disappointed.  If you're going to see it because of Aronofsky, you might be pleasantly surprised.  Although I still think the Rock Transformers were a bit too ridiculous for my taste.

Overall: Definite Rent for those intrigued (roughly 3.5 out of 5)