On The Bookshelf: Juliet, Naked 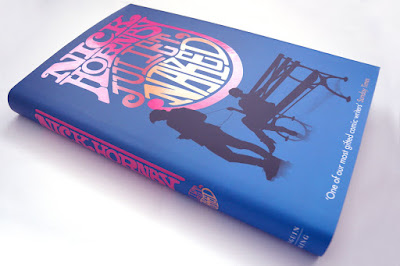 Juliet, Naked by Nick Hornby
My rating: 4 of 5 stars

What do you do when you wake up one day and realize that your life's threads are held together by one very small, practically imperceptible knot and that one good tug of the string could bring the whole thing crashing down?  It's, perhaps, not a new theme, but the subject of the mid-life crisis, in the hands of an audience favorite like Hornby is anything but boring.  Juliet, Naked is wistful, contemplative, heavy on obsession and the romanticism of music that have come to characterize a Hornby novel, with the slight twist that, well, these characters are no spring chickens.  The burden of age bears down on all of us sooner or later, but Hornby's characters are far too stubborn and funny to deal with it in any sort of predictable manner.
Annie,nearly 40, has chained herself to a dead weight named Duncan.  Duncan is obsessed with Tucker Crowe, a reclusive singer-songwriter who left the stage while his first (and only) album was all the rage.  As with all things left unfinished, Tucker's career has become a myth; a legend to be passed down by his fans. When a previously unreleased, acoustic version of Crowe's album surfaces from the depths of the digital trench known as the Internet, Duncan and his Crowe-devoted website become obsessed with the album all over again.  Only Annie has had enough and decides to pen an anti-fan response to the album, pulling at the threads of her life until it all unravels around her.
Tucker Crowe, for his part, is a jaded, selfish, sometimes delusional man who can't seem to figure out if his music means nothing to him, but everything to the rest of the world or vice versa.  He hasn't written a song in years, he's been a terrible father for most of his adult life and then one day, during the peak of his crisis, he reads Annie's review of the acoustic album now known as Juliet, Naked and the trajectory of his life changes.
The dialog, as always, is top notch, and Annie's stream of consciousness tangents are standouts.  But beyond that veneer of humorous apathy, there's an honesty about regret that often hits too close to home.  If I were younger, I might be able to distance myself further from the emotional truths revealed in the throw away lines, the way you can say to yourself "but that won't be me" when you're younger than 28.  But we all know better by now, and yet, at the end, there's a kind of solace, even hope, to finally facing the world as it really is, and who we really are in it. Juliet, Naked makes you remember there's always a possibility of change, always a new obsession to find and always new music to set our life's soundtrack to.  And there will always be some naysaying hipster there to remind you that you know nothing. Like all things, it's about what, or whom, you choose to listen to that makes the difference.