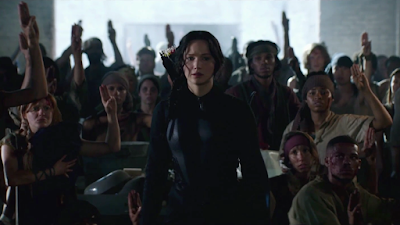 For those who have read The Hunger Games trilogy, we've all known what's coming.  I think the films have done an admirable job of  indicating that Katniss and Company's story has always been about something much larger than just the Games.  With Mockingjay Part 1, we finally get to the story that it feels like Suzanne Collins always wanted to tell, which is the nationwide revolution of Panem.  As with all adaptations these days, the studio is dragging out the process by turning book 3 in to films 3 AND 4, but here, for some reason, I don't mind so much.  The groundwork needs to be laid and I think that there's enough story that the moments of padding don't feel quite as lengthy and disruptive as they sometimes do in other YA adaptations.

Mockingjay picks up close to the end of Catching Fire, with Katniss and Finnick in recovery in District 13 (things aren't going well), Peeta and Johanna in the hands of the Capital (things aren't going well) and Effie Trinket in a jumpsuit (as clear an indicator as is needed to show that things are most definitely, not going well).  Katniss is having nightmares and hallucinating, but there's no time to worry about her mental health as she's needed to drive District 13's giant propaganda machine.  See, when she destroyed that forcefield (I know, I know, the only time you actually use the word 'forcefield' is when referencing dystopian fantasy settings) she sparked what had until then been understood and understated, but contained discontent, into a budding revolution in all of the districts, and now it's time for the sides to gather their forces.  While The Capital is attempting to do that through intimidation and firing squads (a disturbingly effective method of keeping people on 'your side'), District 13 is attempting to gather people under the banner of The Mockingjay.  And yet, Katniss doesn't want to be the Mockingjay. She wants to just live her life.  Until she realizes there may not be any kind of life to be lived if the Capital succeeds.  It's reminiscent of that moment when Pippin suggests that he and Merry just go home in The Two Towers and Merry reminds him:
The fires of Isengard will spread, and the forests of Tuckborough and Buckland will  burn.   And all that was once great and good in this world will be gone. There won't *be* a Shire, Pippin.

Even if that's only in the film version and not in the original text (stop getting your Tolkein boxers in a bunch people) it's a good illustration of the point I'm trying to make which is that Katniss has to be forced to realize, and accept her role.
And so it is, that she must once again witness the horrors of the Capital and President Snow.  Now, one would think that after being forced to fight in TWO Hunger Games, if you were asked to be the spokesperson AGAINST President Snow, you might have some ammunition already set and ready to go, but apparently, Katniss needs a bit of a push.  She visits a makeshift hospital, pledging to support the cause, then and there, only to watch it be destroyed moments later.  So, realizing that President Snow, like many a dictator before him, does not play nice or fair, Katniss makes the decision to support President Coin and District 13's rebellion.  It's like being the new face of L'Oreal, except she gets to carry a bow.
The film manages to build tension admirably on its way to the climax, which is really just the halfway point of this final story.  After demanding that a rescue party be sent in for Peeta, Johanna and Annie, Katniss is able to reunite with Peeta only to discover he's been brainwashed and tortured, and the film bookends with Katniss stuck, helpless, in an underground hospital, unsure of the next step.
For me, there isn't enough Haymitch or Effie, although every time they're on the screen the scene should be nailed down for fear of them stealing it, but it is remarkably consistent with the original story, and although it's unavoidable, since every Young Adult story MUST have a love triangle, there is precious little time devoted to Katniss' heartstrings, and that's a good thing.  This story is about the larger picture, and while a fourth installment may be unnecessary, it also doesn't feel like this third part is just a waste or a throw-away.  It's a decent first act, with promises of a more impressive finale.  This film loses a bit of pace from the previous films, where the timeline of the games served to keep things moving along nicely. Let's face it, the first two are basically Jurassic Park, but with people instead of dinosaurs while this one is far more grounded in the realities of war, but that shift of focus is necessary for the statement this trilogy wants to make.  As with all good in-between installments, the hero (and the audience) are left in a dire situation, with the walls closing in and only the burning desire for revenge to light the way out of the tunnel.  In this case, it just so happens, that they're in, like, a literal tunnel.