On the Bookshelf: The Secret History 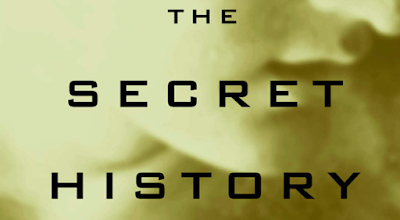 The Secret History by Donna Tartt
My rating: 3 of 5 stars
About two thirds of the way through this novel, I had the following realization:  I was reading someone else’s examination of The Great Gatsby.  Unlike many, I have no attachment to that hallowed novel.  My severe dislike for its characters (in the last few years I’ve at least been able to admit that it’s, perhaps, because those characters are too well drawn by Fitzgerald) has hindered not only any attempts to revisit that novel, but also any attempt to read another Fitzgerald work.  This is unfair, as the reasonable part of my brain is capable of arguing but my heart keeps inquiring “do you really need to slog through Daisy again?” A question that if only Gatsby had asked himself more seriously, we all may have been spared.
But what I can admit freely is that The Great Gatsby made the reader feel something.  Fitzgerald wrote about terrible, cold, base people with the kind of urgency and prose that engenders a passion.  These were characters that needed exploring, this was a story he needed to tell.  Even at the end of The Secret History, I’m uncertain as to what Tartt’s motivation was.  The same story, that of an outsider who wants in and insiders who want out, is told with a kind of tedious boredom, as if the same affliction that has shaped the malcontents that are Tartt’s inner circle has been injected into them not as a warning from the author, but instead, as a symptom of the academic disease the author was suffering.  The Secret History is cold, but with little payoff, a story with a lesson we’ve already learned.
But what is even more bothersome is that, unlike Gatsby, this is a novel that seems to refuse to be tied to the environment it grew out of.  I’m not sure if it just hasn’t aged particularly well, or if it really is written with the purpose of insisting that, like Athena, these characters simply sprang from Zeus’ head, with no links to the world around them.  Gatsby is understandable in the context of the 20s, a response to the 20s.  The characters in The Secret History seem to be completely out of time, existent in only their own world, like some version of Pleasantville.  They seem to speak as if from the 50s, but then indulge in “dope”.  It left me a bit at sea, without any sort of environmental setting to keep a hold on.
Told from the point of view of Richard (half Carraway, half Gatsby), The Secret History unleashes its most obvious reveal with all of the delicacy of a game of Jenga, declaring out the outset that Richard and his friends are murderers (dun, dun, duuunnn) and then, as Richard tells the tale from the beginning, further misdeeds are uncovered.  About midway through, I almost understood why the group murdered their Classics comrade; an almost-man named Bunny has never signaled anything particularly good to me, and this Bunny is no exception.  Although he may be just as over-privileged, unnecessarily over-educated and ill prepared for the real world as the rest, his frustrations often lead to toddler-esque tantrums, and, I was actually in full favor of shutting him up.  Perhaps not in the way they did, but the farewell I felt was nonetheless welcomed.
However, what lead them to need to shut Bunny up is supposed to be the even deeper mystery and, when revealed, it just made me say “really?!”  Oh, the characters were so coked up and drunk out of their minds that in their effort to basically perform a séance hoping for the appearance of Bacchus, they killed a guy? Oh, sure, why not?  I guess that’s just how the rich, do.  Over indulge and then murder.  Do you see now how Gatbsy suddenly sprang to mind?
And yet, that’s not even the worst of it.  What awaits is an even more mystifying final act that feels like it was duct taped to the original end in an effort to add more pages, you know, to be a serious novel.  The finale involves incest amongst twins, forbidden love and one last suicide, just for good measure.  Even now thinking about it, the thread tying all of these things together grows thinner.  At the time, I think I was just happy to have finished it, an escape from this gangrenous crew of scholars, and so awarded 3 stars.  Or maybe this review is unnecessarily harsh due to my internal fight of whether a character has to be likeable to be fully relatable to the audience.  It would have helped if Camilla wasn’t such a Daisy knockoff. The impossibly cool It girl with problems.
When it comes down to it, maybe it’s just that what I wanted was a page-turning mystery, and what I got was a not-so-interesting character study, because, as it turns out, what we knew at the beginning of the novel, was true throughout all 500 pages, and that is that over-privileged kids who murder because they can, just aren’t that interesting, and neither are their problems.

View all my reviews