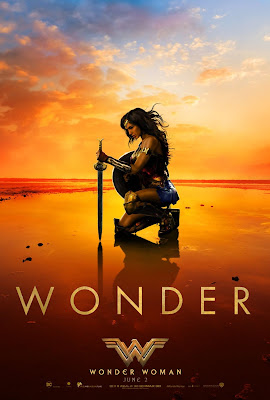 Hello, my name’s Marissa and I’m 34 years old and I’ve never seen an episode of Wonder Woman (not even that TV Pilot-turned TV movie from 2011). I’ve never read an entire Wonder Woman comic issue. I HAVE been aware of the pop-culture influence of the lasso of truth and the invisible jet. In short, I’m the audience that this film is made for and that fans of Wonder Woman have an aversion to. I am both not worthy of enjoying this film (because how can I, a know-nothing, respect the long and storied history of this character?) and simultaneously, the gen-pop audience that any superhero film must reach.

If navigating those waters and making a cohesive film with those requirements in mind are the criteria for a successful superhero film these days, then Patty Jenkins’ Wonder Woman is a triumph. Because by the end, I did want to be Wonder Woman. I did want to pass this incarnation of the character on to younger generations so that even more children might someday add Wonder Woman to their list of personal heroes and inspirations. And yes, the film is that good at making you believe in Diana Prince(ss of Themyscira) demigoddess and warrior princess.

In a way, it’s kind of astonishing that this ISN’T a Disney property. To a woman who was raised on Disney’s animated films, it’s difficult for me to look at Wonder Woman and not think of her as a Disney Princess. She’s a mythical woman, an Amazonian warrior who takes it upon herself to save humanity.But maybe she was a little too progressive for Disney back in 1941. Just 4 years after Snow White whistled her way to a happily ever after, Wonder Woman was brought to life by William Moulton Martston, an American psychologist. An amalgamation of the world’s strongest women and their defining personality traits, Wonder Woman is literally a Greek Goddess.

I mean, her mom’s a queen and, for all intents and purposes, her dad’s Zeus. Speaking as a woman who has warred with her confidence on more than one occasion, I rarely considered her as a role model because, how could I EVER look that good in a body suit? What I’m saying is, in her long and storied history, mostly penned by men, she sets the bar pretty high. What I should have been paying attention to is the fact that then she takes the bar and at least attempts, to smash the patriarchy with it.

Just taking all of that into consideration, Wonder Woman is a complex character to bring to the big screen. Director Patty Jenkins, star Gal Gadot and screenwriter Allan Heinberg do an admirable job of trying to distill Wonder Woman’s essence but steer clear of navigating the really tricky emotional balance that this character could explore, and instead utilize her for what she is, the ultimate strong female lead. Their Wonder Woman is all goodness, all strength, all of the time. A mischievous child who grows into a courageous warrior, Diana is not only the best of her Amazonian tribe, but the best of all of us. And for those reasons, Gadot seems born to play this role. Former beauty queen, model, law student and soldier, Gadot’s real life is nearly as mythical as Diana. She really is the perfect fit for the character. And while the specific type of Wonder Woman’s brand of feminism might be up for debate, Gadot takes this moment to become every little girl’s favorite superhero and runs, kicks and jumps with it.

Diana’s prince (yup, I did it), as it turns out, is Steve Trevor, played by all-around good-lookin’ dude and member of the Hollywood Chris Club, Chris Pine. Probably at one point in the running for Captain America, Chris Pine is no stranger to the hero world, with his turns in Star Trek and any franchise Ben Affleck has left. The same qualities that imbue Steve Rogers, define Steve Trevor. In a world at its brink, Steve is just a man who wants to end a war single-handedly while always doing the right thing. You know, a regular guy. In all seriousness though, Pine and Gadot have fantastic chemistry and it’s nice to see a couple that can work well together on equal footing (especially in a DC film, she whispers).

For me, the highlights of the film are the first and middle acts. The training grounds of Themyscira offer what amounts to warrior woman boot camp. Scene after scene of believably strong women displaying power, intelligence, and quite literally, juggling the world on their shoulders. And yet, it is precisely their insulation that is problematic. Without competition from the outside world, their island is an idyllic home of fairness, justice, seemingly no crime, but also no children. Diana alone offers the real hope of continuing the race. She is told she came about because her mother wished to raise a child so much that she sculpted her from clay and was given life by Zeus. Diana or the Themyscirian Prometheus. There’s probably a much longer discussion to be had here about the maternal desires of women. Why only Hippolyta is granted a child, does that cause jealousy among the other Amazonians as it, on the surface seems incongruous with the Amazons mission. But hey y’all, this is a just a comic book movie, I won’t go there.

What I will say is that the casting of Connie Nielsen and Robin Wright is perfect. Wright, particularly in Diana’s training sequences, stands as the voice of modern feminism as she, over and over again, forces Diana to truly believe she is stronger than she thinks and that it is her thoughts alone holding her back from her full potential. It’s fascinating to think that this is the same woman who came to fame as Princess Buttercup. See everyone, middle-aged women DO get an evolution in Hollywood. Or at least Robin Wright does, and for that I’m thankful. Nielsen, while also great, is burdened with the role of being the bearer of mom-guilt. I mean, the last thing you need to hear before leaving the only place you’ve ever known and knowing you can’t return is your mom telling you “You were my greatest love…today you’re my greatest sorrow.” Oh thanks mom, you’re not mad just disappointed? But apparently that’s the motivation we women need to kick ass in the world. For Diana it works.

Upon entering the outside world, the world of men and war, Diana’s powers grant her a status no other woman has. It’s walking a fine line between saying “see women are equal” but knowing that really means “oh, only THIS woman”. It’s fine in this case, since she is Wonder Woman, but just know, I would not have been averse to seeing Etta (Lucy Davis), Trevor’s secretary actually get in some fisticuffs and show off some punches of her own.

The only inherent problem with the film is that it comes 6 years after Captain America and the comparisons are both warranted and prescient. It’s a difficult trap to escape, the Marvel/DC timeline that has been laid down. Reversed, I wonder how Captain America would have fared. The circumstances for both are the same. Films with distinct vision, well-directed, led by actors that are an absolute perfect fit for the role, and both movies end with a wistful, romantic glance at an old photograph. (Interesting to note that Peggy is brought to tears by tiny, mousy Steve, not buffed and puffed Captain America, but I digress). In this game of superhero chickens and eggs, it’s a tough thing to be the follower. But at least with this entry in the DCEU, the actual film holds together. At least with Wonder Woman, the story is coherent, the cast and writing work and the motivations by and large make sense. I mean it’s not like Wonder Woman gets pissed just because Ares, her nemesis and Greek god of War happens to kidnap a regular woman ALSO named Hippolyta.

So, in the end, Wonder Woman is a mixed bag, but like a really well mixed bag. Like buying the multi-pack of Starburst and getting mostly pink and red and only like three yellow. I will watch it again, I will be moved by it again, I will wonder about it again and any movie that encourages that is a movie worth seeing.
2017 movie reviews DC Comics DCEU Gal Gadot Justice League Patty Jenkins Wonder Woman