Zack and Miri: A DIY guide to well...you know 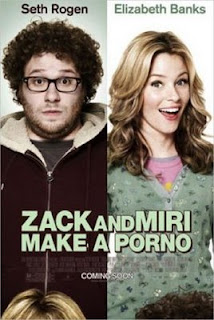 Zack and Miri Make a Porno...there I said it. The title alone pretty much tells you exactly what you're going to see. Kevin Smith, never one to shy away, succeeds at once again pushing the boundaries (and MPAA hairlines) back just a little farther with his latest film.

Here's the plot, you've read it before I'm sure. Boy and Girl are JUST FRIENDS, let me repeat that JUST FRIENDS, until their power is pulled and their water stops running and they decide to generate their own cash flow. Then Boy Loves Girl, Girl Loves Boy, but well there's always a distraction in any good romance right? I mean Scarlett had Ashley Wilkes, Maria had to worry about Tony getting knifed, and Miri has some serious competition and unresolved feelings, hey don't we all?

Here's the thing: although this is a typical romantic comedy, the sheer fact that Kevin Smith is directing it puts it in, at the very least, a unique category. You might know where this road ends, but it's a lot more fun when it's not paved in yellow brick. This movie is dirty and filthy and so much fun it's sometimes hard to notice the cracks.

Smith might have burst on the scene armed with only black and white film, a cast of unknowns, and an indie attitude, but he's a movie geek at heart and has never stopped crafting films that just keep audiences entertained.

Seth Rogen and Elizabeth Banks are naturals in the slackers turned entrepreneur roles and there are enough cameos that, if you weren't busy laughing or cringing, you could probably say "hey I know that guy/girl!' through the whole thing. The first half is unrelenting in it's vulgarity, but there's a moment where everything changes, and if you see it, you'll know what I'm talking about. Smith is so adept at dialoging his way around issues that when the heart of the matter is revealed, it's somewhat surprising how subdued he can be.

Zack and Miri is a tilt-a-whirl of "oh god, this isn't happening" awkward moments, "Did he just say that?!" gasps and enough nudity to fill an Abercrombie & Fitch calendar and the combination is exactly what the bleak movie season needed to kick it in the butt!

But be prepared. This is not a film for the faint of heart and it's not a film for the youngsters either. If I walk into a theater and see 4 13 year-olds, I'll personally tap the usher on the shoulder and kindly remind him to kick these kids out. Everyone who's going to see it should know what they're in for, but might be surprised on the way out.

Overall: It's probably not Smith's BEST film, but it's truthful and fun and will keep you quoting for weeks.

Unknown said…
she's back...
hey check out our blogger challenge... don't know why i didn't send you this earlier-
http://www.donorschoose.org/donors/motherboard.html?motherboardId=1
October 8, 2008 at 2:00 PM

V-Man said…
I liked your review, and look forward to seeing the movie. I was a bit dissapointed that your review didn't include bad lighting, soft jazz music in the background, and several muscular men in mustaches dressed as construction workers and bikers.
October 12, 2008 at 4:25 AM

V-Man said…
Now that I've seen the movie, I have to agree that there are plenty of big laughs, heartfelt moments, and disgusting sight gags. It's not a great movie by any means, but it's worth seeing.
Justin Long is proving himself to be a much better actor than I gave him credit for, I just didn't expect to see him with Superman.
November 9, 2008 at 9:52 PM