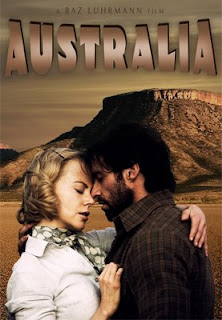 I would qualify myself as a fan of Baz Luhrmann, I really would. Of course, I loved William Shakespeare's Romeo and Juliet, I loved Strictly Ballroom as well. Moulin Rouge was slightly too much editing, but I liked the concept, but I find Australia is just too much of everything for me. There's too much magic, there's too much snootiness, there's too much drama, too many bombs, and far too much predictablity. I think Baz took the word "epic" and went to town with it.

The film centers, of course, on Australia right at the beginning of World War II. Nicole Kidman is the wealthy British aristocrat who flies to the land down under to persuade her husband to sell his failing cattle farm and move back to the UK, until she finds out about his demise. Hugh Jackman is the cattle drover who's been hired to drove the cattle from the outback estate (Faraway Downs...oy) to Darwin. Along the way there's an evil, evil man, a lonely aboriginal boy, a drunk, a stampede and another man behind the curtain...oh wait, that's the other Oz.


The first half of the movie I found entirely ridiculous and off-putting. In fact, I needed the manipulation in the second half of the movie to feel anything for the characters at all! I was asked when we left the theater..."but you had to like it, weren't you crying at the end?" Of course I was crying, you would cry too if Hugh Jackman left you (wasn't that a Mo-Town hit), especially when he looks as good as he does in this movie.


The characters are so archeytpal that the scenes practically write themselves. Fill in this line for me:

"It's a shame you didn't have kids" Hugh Jackman says looking charmingly at Nicole Kidman..

If you said "you would have been a great mother" you win the prize. Come on Baz, you're so much better than that!


The cinematography and the setting are what save this piece. It's beautiful and breathtaking and there are specific shots that, if people do go see it, will live in the memory well after the reel has finished rolling.


I'm hearing comparisons of "Gone with the Wind" a lot in conjunction with this movie, and let me tell you, I've seen Gone with the Wind and this is no Gone with the Wind. Although Jackman and Kidman adequately fill the shoes of dashing, devastatingly charming leading man and society girl-gets-dirt-on-her hands, they're not given a lot to work with. I can't abide the misuse of the always underrated Bryan Brown and David Wenham. If you were looking for an Oscar release on Thanksgiving, you might be sorely disappointed when Australia ends up with just visual and sound noms...if any.

Overall 3 dingoes out of 5....anyone else missing Harry Potter during the holidays?!?!
2008 Movie Reviews Australia Baz Luhrman long movies