Quantum: Not a sol-ACE in the hole 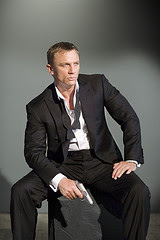 Let me start off with apologizing for the pun-riffic title, I always try to be clever but seriously, what else in the world can you say when a film is titled "Quantum of Solace"? James Bond, you leave me NO PLACE to go!!


Anyway this is indeed a short, sweet, hopefully to the point review of the latest in the Bond series, seeing as I saw it almost 2 weeks ago and can only vaguely remember the second action sequence in the film where Bond is somehow able to shoot a man upside down hanging from a rope.


In the shortest of terms, I didn't hate this movie. I didn't love it either. It's somewhere in the middle, but what i do know is that with a plot line this thin, I think it's a good thing to have substantial actor like Daniel Craig at the helm of things. I love Craig's Bond. I love the brashness and the no-fear action. I like the superior-but-not-too-smug responses, and I love the fact that they actually have to write a script for Craig, not continue on with the terrible puns that I'm convinced were the end of Brosnan's Bond. In short I feel like Craig is much closer to Sean Connery's Bond (except without the herpes) than any of the other in-between Bonds.


Most people will tell you they probably didn't have any idea what was really going on in "Quantum" but I think I followed it along pretty well. The only problem was that there really wasn't much to follow.


The action sequences are fantastic, no doubt, and there are moments where you're clearly reminded that you're watching a Bond film, like the reference to Goldfinger where Bond's latest conquest is found dead, sprawled across the bed, but this time she's covered in oil instead of gold paint, probably appropriate is oil is the "black gold" commodity of today. But there was a whole chunk of the middle that just didn't seem to keep the plot moving and I almost found myself wishing that Daniel Craig would needlessly hop in bed with someone just so I could see something that made sense for a Bond movie.


Not nearly as good as Casino Royale, but I do hope there's something good enough to keep the Bond franchise moving along, I'd like to get another glimpse of Craig in a tuxedo...

Overall 2.5 martinis out of 5 (too shaken and not stirred enough)
2008 Movie Reviews James Bond Quantum of Solace