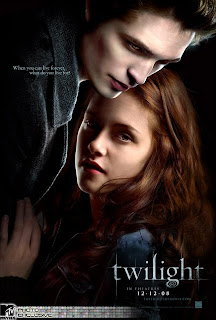 Oh goodness, there is so much to say about the phenomenon that is Twilight, that I'm not quite sure where to begin, but I'm going to do my best.


Seeing as this is, at heart, a movie review, I'll start there. If you haven't heard about Twilight by now, you're either A. a vampire yourself, B. living in the remotest part of Greenland, or C. deserted on an island with Matthew Fox and Josh Holloway, in which case, I'm slightly jealous.


Twilight is for teen girls today what N'Sync was to my generation, without the substance of Justin Timberlake. If you're a parent you've heard of it because you were dragged to Barnes & Noble and then begged to drive to the movie theater upon the film's release. If you're in between parent and teen you've heard about it because you know SOMEONE who's in one of those age ranges and if you're a teen, well for like 60% of you, it's probably your world right now.

I'll pretend I'm writing a review for one of those lost island people who's wondering what they'll see as soon as they're rescued.

Twilight is the story of a 17-year-old girl's experience of moving from the big city to the too-small town and falling love with, of all boys, a vampire named Edward Cullen. Danger ensues because, well because he's a vampire, but of course Bella, our heroine, doesn't care because, well because she's 17. The same plot exists in both the film and the book, with good reason. If Catherine Hardwicke, the director, had dared change anything, rabid fans would be burning crosses on her lawn, no doubt and throwing garlic at her suv as she tried to escape the fandemonium.

The book is not all that good, and hence the movie isn't all that substantial either. I have to say it was fun to go on opening night for the "experience" of it all. I mean the amount of swooning done when Edward comes on screen would have been enough to topple the Titanic, but all in all, it's just entertainment with very little substance underneath. If you're not a fan of the books or haven't read them, I don't highly reccommend it. There's no point in going if you're determined to hate it simply because it's a pop-culture phenomenon either. If you're curious and find Robert Pattison somewhat smoldering, as I myself do, then by all means, just enjoy the moments he's letting his eyes bore through the camera at you. I find it's nice to pretend that someone will look at me like that one day, at least for a 2-hour period of time.

Really, if you're reading this now and haven't seen the movie yet, you're a little late as it already smashed opening-weekend box office with a 70 + million dollar ka-ching on the Hollywood register, but more than likely if it's taken you this long to think it through, you'll probably be better off waiting for dvd.

Overall, 3 out of 5 bitemarks...well a whole 1 of those is just for Pattison himself, the movie only garners 2...
2008 Movie Reviews Twilight