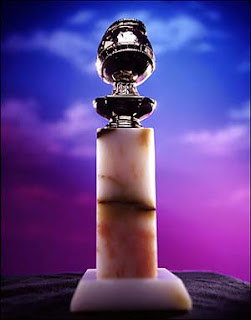 Yes, it's true, the end of the year always rings in the beginning of another awards season.  While some critics groups have already reported their year's best lists, like the New York Film Critics Circle and the Los Angeles Film Critics Association, whose picks can be seen at www.nyfcc.com and at www.lafca.net/news, respectively, the big guns are just being pulled out.  The Golden Globes (Jan. 11th @ 8 pm on NBC) released their nominations list this past Thursday and, in case you haven't heard, there are a FEW surprises, to say the least.  Please feel free to comment, rant, demand recounts, etc...
Supporting Actor in a Motion Picture:
Tom Cruise-Tropic Thunder
Robert Downey Jr.-Tropic Thunder
Ralph Fiennes- The Duchess
Philip Seymour Hoffman-Doubt
Heath Ledger-The Dark Knight

Actress in a Motion Picture-Drama

In my opinion, the Dark Knight got the really really really short end of the stick.  No nod for Christopher Nolan, along with a best picture snub with the Hollywood Foreign Press Association giving a surprise slot to The Reader.  A couple of categories have multiple nominees for the same picture, or duplicate nominees in different categories, and I'm thinking that some of these will eventually cancel each other out.
However, the nominations seem to me a product of a very odd phenomenon striking Hollywood these days.  While the Independent Film movement that swept through movies in the late 90s seemed to breathe some much needed fresh air into the industry, something far stranger is happening now.  Once the "Independent Film" went mainstream, movies had to figure out a way to market themselves as unique to an audience, and it seems that the way they've decided to do that is to release them to as few cinemas as possible, while still releasing to enough to be recognized come awards season.  Most of the really good, or even great, movies of this year may not be available to the viewing masses.  Considering that Four Christmases has ruled the box office roost for 2 weeks and that there are a handful of people who know who Sally Hawkins is, I'm not entirely sure that this is the best approach.  It seems like more terrible movies are being made, fewer good movies are being made, and even worse, fewer people get to see those movies.  In essence, it feels a little elitist.  Hollywood won't survive for long if this continues, or if it does it will have to effectively split into 2 separate industries, or maybe it already has.

V-Man said…
I watch a lot of movies and yet I haven't seen most of the nominees because they are not in wide release.
I'd like to watch the Wrestler, and as soon as I find a theater in a 30 mile radius that's showing it, I'll invite some friends to join me.
I did see In Bruges and I thought it sucked. The actors were great, but to quote a woman who attended the same show I did "That's possibly the worst movie I've ever seen."
There were four performances that stood out this year: Heath Ledger and Gary Oldman in The Dark Knight, Robert Downey Jr and Tom Cruise in Tropic Thunder. I'm not the biggest Cruise fan by any measure, so it says a lot that I think he gave his best performance possibly ever.
I think the Hollywood awards system is due for an overhaul. Something is wrong when the performances the audiences love are passed over for a performance no one ever saw.
December 13, 2008 at 1:25 PM