- March 10, 2010
The weird thing about this road trip is that it's not a road trip all the time.  I should have perhaps titled this the Great American Car Trip, but it's done now and I'll have to live with it.  Upon arrival at our destination (Tampa, FL) we've pretty much been lying low.  Days 3 and 4 consisted of the following highlights:

-Chip discovering the full length mirror in the room and convincing himself that that handsome white dog he saw was coming to get him, so he best bark as loudly as he could.  It was so entertaining I'm toying with the idea of a full length mirror for the house.

-Me attempting to swim in water that deceived me in a way that I cannot fully detail.  Simply seeing an open pool had me so elated that I let it get the better of me.  In much the same way that a person sees the wonders of a buffet and is confident that the can take on the whole thing, filling 3 plates and finishing half of one (not that I've really ever done that) I suited up, dipped my toe in and, undeterred by the temperature convinced myself that once in, it would get warmer.  It did not.  I plunged into what I imagine the Antarctic would feel like and my lungs began to contract uncontrollably, forcing my breath to sound like hiccups.  I made it 7 laps.

-Mom and Dad made it to the Yankees V. Pirates outing, but the result was sadly a 12 to 7 Yankee loss. I suppose it wouldn't be sad if you were a Pirates fan, but honestly I don't know any of those, so I can't say.

So if you've read, you now know that the reason I skipped days 3 and 4 was that, well there wasn't a lot to detail. But it's now day 5 and a slight adventure was undertaken today.  After finding the National Park passport that was purchased roughly 18 years ago, I have now become obsessed with the idea of visiting as many National Parks as I can on this trip.  Luckily, not very far away was De Soto National Memorial, in Bradenton, FL.  After crossing the Sunshine Skyway Bridge, we were on our way to Bradenton, which happens to be very nice, at least on the surface.

When we get into the Visitor Center we are helped by a kindly older lady who is volunteering her time.  She assures us that we can view the 20 minute video whenever we would like.  In five minutes we're sitting a makeshift theater getting ready to view "Hernando De Soto in America" but not before the kindly volunteer assures us "we're not here to celebrate De Soto...not by any stretch of the imagination.  What happened is this land was given to us by 2 doctors to stop development, and we did that.  Then we had to call the land something, so we did that too.  There isn't even any evidence of the Spanish in Florida except for one button found in Tallahassee." I'm not sure how much of that is true, but I liked her style, so I thought I'd capture it as much as possible.

What follows is the story of Hernando De Soto, a greedy explorer (weren't they all?) who left Spain despite his riches in search for more riches.  Ironically, on CSI:NY there are millions of gold bars being shown at this very instant.  If only De Soto had known all the gold was in New York!  So along for the ride are 600 men, lots of horses, pigs and dogs and a lust for the new world.  Until it's realized that the New World isn't quite so eager to have them.  De Soto ended up leading his men all over creation, but mainly up through North Carolina, then west , across the Mississippi, and then after some rough winters, he finally croaked, leaving his men and his captives to fend for themselves.  After a poor decision to try a land crossing in to Mexico and running into some deserts (if only they'd consulted Rand and McNally first) they doubled back, down the Mississippi and finally made it down to Mexico where the other Spanish explorers were hanging out.  There's your history lesson for the day, there will be a quiz when I return.

After leaving Bradenton we scuttled down some keys, into the Sarasota area.  For those who haven't been to the downtown Sarasota area, it looks a lot like Newport across the Mason-Dixon line.  Lots of money and great houses, and a GIANT statue of the sailor and the nurse photograph.  I'm still not sure on that.  Anyway, the weather is thankfully gorgeous and we actually turned on the air conditioning in the car today.  Air conditioning in March is quite simply divine.

Photos of the Day (you're getting 2 today): 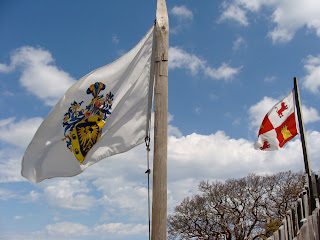 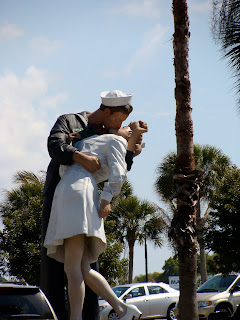