-Uruguay were the first winners of the World Cup in 1930


-France has the oldest average age in their Group and Uruguay has the youngest, but not by much.

Who I'm rooting for: Uruguay.  I know, I know, I'm breaking my own no-Latin American team rule, but they've never personally offended me, and I'm taking them up as the underdogs for this match.  Plus, France has waaaaay too many questionable things going on behind the scenes for (prostitution ring, anyone?) for me to feel comfortable supporting them. 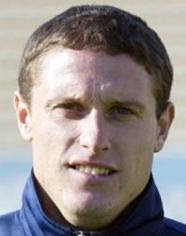 and, of course, the captain (I am a sucker for a man with a title), Diego Lugano (Fenerbahce S.K.-Turkey) 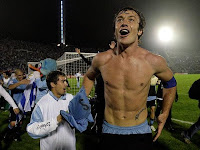 And it looks like the smartest thing France did was get Yoann Gourcuff (Bordeaux) as a Midfielder: 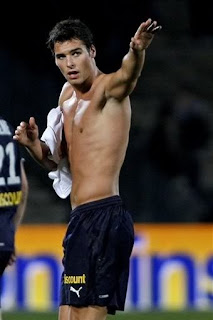 By the way, I just heard the most superb analogy.  The commentator just said "France is fitted with a Rolls Royce engine but they're performing like a Go-Kart." Clearly these guys are better than the regular ESPN announcers.

So overall, it wasn't the most interesting game and there was much less emotion than in the Mexico/South Africa match.  Uruguay was much more exciting than France, who looked completely lost.  Uruguay's defense was what it was all about and despite a red card, their 10 were able to hold off the French favorites.  So with a 0-0 draw, Group A all moves forward still even, at 1 point each
2010 World Cup