- August 25, 2010
Because this is the first day that I can remember in the last few months where I will actually need my covers and probably won't turn on the fan, not to mention the fact that the sun set before 8 pm, I'm tempted to wallow.  I feel as if I could mourn the end of summer, and throw a self-pity party and begin going to bed earlier in preparation for the seasonal depression that will inevitably be brought on by winter, that special time of year invented by some horrible sorcerer who now masquerades as a meteorologist.  But I won't.  Instead, I'll make a list of the boys who have captured my attention, or who have just gotten better and better, in my opinion, over the summer.  Allow me this one last summer luxury.  Oh, who am I kidding? I'll make at least one more list of boys who should be my arm candy before the year is out, but here's the summer edition.  It's very possible that there will be revisions and additions to this list, but what you see is what you get, although it's in no particular order.

If you didn't see Inception you're either the victim of this piss-pot economy (in which case I'm sorry), a new parent  who just doesn't have time (in which case I understand) or you're a fool (in which case my pity is all dried up).  Hardy is one of the best parts.  Seriously, he just fluctuates between the best and the second best for me, and it's not just because of his looks and his accent, although those account for a healthy chunk of my adoration.  He's a truly gifted, genuine actor who is just starting to get the recognition he deserves.  You should also check out Bronson released last year in the US and based on one very intriguing and true life character

You might have caught him in HBO's The Pacific miniseries, or you might have just found out about him with his starring turn in AMC's new show Rubicon.  Either way, he's a standout and 2010 has been a good year for him.  I'll be waiting on the edge of my seat to uncover the conspiracy in Rubicon and keeping it on DVR just to catch a few more glimpses of his super-intelligent (and conveniently super-hot) pattern analyst. 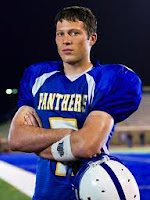 There are few networks that could hope to get as lucky as NBC did when casting Friday Night Lights; how they've managed to not capitalize on that and have shipped this fantastic show from network to network like some sort of television pong is beyond me.  The fact remains that Taylor Kitsch and Zach Gilford have not only kept my eyes glued to the screen for more than just aesthetic reasons.  Sure they're heart rate rising worthy, but they're also the heart of the storylines, and along with the Taylors (Eric and Tammy) they're the axis on which Dillon turns.  If you made it through the Season 4 episode "The Son" without crying, then you're a robot.

He's a relative newbie to the list, but I have a feeling I won't be taking my eyes off of him for quite a while.  BBC America and SyFy have become my go-to networks this summer, and his series, Being Human could technically fit on either.  It only airs on BBC America, which is also the home of one of my other intriguing boys, Matt Smith aka Doctor Who, but if you get a chance to catch this show any way you can, I'd suggest it.  I'll be going back and watching Series 1 as soon as possible, thanks to Netflix!

He's hilarious, unassuming, and yet compulsively watchable.  Mainly known from The IT Crowd, he's also got a couple of films under his belt.  You might recognize him from Pirate Radio (or The Boat That Rocked) and, though I didn't see it in theaters, he makes an appearance in Dinner For Schmucks, which honestly is enough reason for me to rent it.