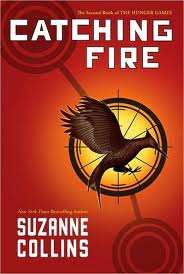 The fire that was ready to rage at the end of the first book seems to have died to smoking embers at the beginning of this second installment.  Katniss, Peeta and the audience all pick up right where the train dropped us off, in a District 12 that, despite the distraction of the Capitol's celebrations for its victors, remains, on the whole unchanged.  Katniss is hunting, with little else to take up her time, Peeta is baking and painting, Haymitch is still drinking, and things are familiar; perhaps not good, but at least familiar.

This monotony is where the book drags for me.  Perhaps I'm just on the journey enough to feel the lag of this beginning.  Maybe the high provided by the first book needed to have the drop of the beginning of this second book to make what follows possible.  For me, as the first book seemed to hit the ground running, it, in my mind laid a blueprint, and though the end of this second installment almost runs up to meet you and push you off of yet, another cliff, there isn't quite as much expansion on this world of Panem as I had hoped.

Catching Fire traces along the same lines of The Hunger Games, forcing Katniss and Peeta, once again into the arena.  The plotting of this novel certainly run deeper than The Hunger Games goes, granting us a clearer view of the motives and perhaps deadly consequences, but not much more.  While the character development of The Hunger Games evoked emotion, there is no Rue to save this turn in the arena.  The introduction of Finnick Odair and Beetee are the high points, in terms of character, and even they are held at arm's length.  By the time the Games finally began, I was almost eager with anticipation, because it's clear that these action sequences, these moments when Katniss has to be on her guard are where Collins shines as an author.  The pacing immediately picks up, engaging that page-turning, edge-of-your-seat emotion again, and the imagination of Collins, the chief Gamemaker, for all intents and purposes, is impressive giving a slight twist to the arena this second time around.  The last third of the book makes up for the lag in the beginning, and while the end is enough to make me glad I picked up the series after the third book had already been published, negating my need to wait (I was never very good at waiting anyway) it feels like there might have been some room for expansion, some moments of development that could have been that simply were edited out to make the need for a third installment even greater.

Katniss also didn't seem quite as sharp as I remember her being in The Hunger Games.  There seemed to be a lot more over-thinking going on and obviously incorrect assumptions being made on her part.  As a result there were several "Come on Katniss...Don't Be Stupid!" moments I uttered as I read, wishing that she'd just have some tracker jackers to release or some more tree rats to hunt so that she could be thinking clearly once again.  But perhaps these are just the musings of someone who isn't, perhaps, at the core demographic for this series.  Peeta appears to make all of the right and rational decisions, leaving Katniss, who in the first novel seemed resourceful and reliable, almost floundering and dependent.  As someone who was thrilled that this series might introduce the world to a teenage female heroine who cared about more than whether or not her boyfriend sparkled on a sunny day, I was disappointed to read the "No matter what I do, I'm hurting someone" line on page 120, seemingly putting the focus of the books on the idea of the love triangle, instead of what is clearly a much much larger picture.  That's not to say that the 17-year-old that I still feel I am sometimes isn't kind of in love with Peeta.

With Catching Fire, the good news is that I feel like I'm heading somewhere, the bad news is I'm not sure I'll like it more than where I've been. If the last few pages of this book are any indication, we're certainly in for a bumpy final act, and even though I may not have loved this one as much as the first, I understand the need for it, and am thankful that it's still a book that makes me feel like I've evaporated in this world and am now, or at least, when reading, stamping my passport to Panem.  I'm not certain that it's a place I'd like to visit, but then again, maybe that's the entire point of The Hunger Games, maybe it's about time we start deciding what the future will look like.  While that task might seem a little too difficult for most of us at this moment, we only have to wait the moments that it takes to open Mockingjay to find out what kind of a future Katniss will find.