Black Swan-What's Lurking Inside You?

- December 19, 2010
I think I've officially decided that I'm not that great at reviewing.  I love movies, or at least I love the movies that I love.  Beyond that, I only know when I find something visually stunning or intriguing; something that rattles my brain or makes me dig a little deeper.  Or, on the other hand, I definitely know when it's a movie I hate or perhaps one that makes me wish that I could tear my own eyes out, if only I could safely return them to their sockets without injury at the end of 120 minutes.  With that being said, what will follow from now on, won't be so much of a review, more of an analysis, on the movies I feel like analyzing.  Black Swan I feel like analyzing. 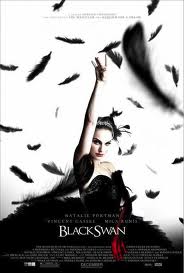 The first thing that must be said for this film is that, if you're going to see it, please be prepared to see a movie in which nothing is as it appears.  This is not a film that works on a literal level.  It's a fairy tale for adults.  A fairy tale for people old enough to have experienced pressure and pain and the need for freedom.
I didn't quite realize it until the end, but what the credits confirmed to me was that this was essentially a ballet within a play; a modern re-telling of "Swan Lake" in such a way that it actually has the audacity to not just use the story as it's base, but also show the story itself.  It's sneaky like that.
So often these days, a film tries so hard to be realistic, to root itself in daily life, that we're only vaguely aware that we're watching characters.  That's not the case with Black Swan.  While the characters are people we think we can recognize and easily identify, it's almost as if there's some sort of thin veil between the screen and the characters, adding an extra layer that the audience has to attempt to see through.  Some in the audience may be able to do that, and some, like the ones I overheard will say things like "why was she so cold all the time?"  While questions of that sort are understandable for a movie like Inception, they're essentially irrelevant with a film like Black Swan because the two films have very different objectives.  While people want a film like Inception to pay attention to it's plot holes (an issue I understand, but don't have a problem with), Black Swan isn't playing by movie rules, it's playing by ballet rules, and, in ballet, as you'll find out, anything is possible.
Black Swan is the mirror image of Swan Lake.  The story of a girl, imprisoned in a world that she didn't choose, but one in which she thrives.  Nina Sayers (the completely engaging Natalie Portman) is our Swan Queen.  But while the goal of Tchaikovsky's swan queen was the need of true love, Nina strives for something a little more modern, perfection.  Nina's prince isn't the unsuspecting man who's so easily fooled, but instead the mirror, darker image of a man who knows all the tricks, and attempts his hand at being the duplicitous head of the ballet company, Thomas (Vincent Cassel, a man who, simply by being so supremely French makes us a little suspicious of him anyway, sorry Vincent).  And Nina's very own Black Swan is in the easiest explanation Lily (the surprisingly Portman look-alike Mila Kunis) but in the more difficult explanation is Nina herself.
While Swan Lake simplifies things a bit by having two distinct characters (though portrayed by the same ballerina) Black Swan, once again flips the mirror by having one character played by two different actresses.  This is not a story of love, but of love gone wrong, at all turns.  While the ballet itself is a thing of beauty, a polished classic of modern movement, the film is the gritty, grotesque, painful reality of not only what it takes to have that polished shining moment on the stage, but also what it means to face the duality of our own lives.  It's a 21st century Grimm's fairy tale about being careful what you wish for, because sometimes you just might get it.  It's a constant mirroring of both our emotional and bodily needs: pain and pleasure, fear and triumph, joy and disappointment.  It's all there.
Tthe performances are fantastic, but Portman shines the brightest in a role that is almost certain to result in an Oscar nomination, if not a win.  The directing, a combination of insight, artistry, suspense and horror is enough to make me want to thank Darren Aronofsky personally.  He gets his point across by having mirrors upon mirrors, and alternately featuring Nina in white and Lily in black.  The entire film feels eerily foggy and grey, with the exception of Nina's frighteningly cotton-candy pink bedroom.
While I liked The Wrestler, Black Swan resonates more with me, but that could just be the dance aspect, but it could also be because it feels more like a journey of discovery, which is always more exciting, not so much a witnessing of redemption, in which we're already removed from the situation.  Yes, it's startling and will probably seem "weird" to a lot of people and some people may not be willing to stick with it, but if you're intrigued, then it's a journey you might want to take.