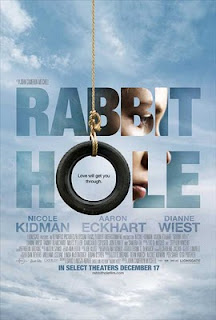 On the surface, Rabbit Hole should be one of those movies that you should only see once in your life, mostly out of fear and necessity.  The premise sounds like it should be one of those movies that's only loved because it's important , but in reality, after seeing once your heart, or maybe your soul can't bear to be torn apart like that again.  I feel this way about several movies, perhaps most recently Revolutionary Road.  Sam Mendes 2008 contribution to the Academy awards was certainly full of fantastic performances and brilliant cinematography, but let's face facts, it also packs a wallop.  It's not just depressing, it seems to me to stealthily point out how everyday life slowly beats our dreams into submission.  It's not a feeling that I would want to sink into repeatedly.  In fact, I'm pretty sure that they are prescriptions available to help cope with that feeling, mainly Zoloft.  I'm getting sidetracked though; I don't want anyone to think that's how Rabbit Hole operates.  I was using this in a comparative nature, with the aim of ultimately saying "Rabbit Hole does not make you feel this way".
Based on a play of the same name, Rabbit Hole tells of the trials of a couple (Nicole Kidman and Aaron Eckhart) who have recently lost their 4-year-old son.  I know that this sounds grim, but thankfully, we're spared the horror of the moment, picking up 8 months after the accident.  It's an interesting study on the way in which life always does go on, even in the midst of life changes.  Now, this may not be groundbreaking subject matter, but there is something seemingly unique about the way that the script, and ultimately the film, handle the idea.  It's unflinchingly honest, even humorous in moments, and it refuses to wallow, only confront.
Nicole Kidman is, deservedly, getting Oscar buzz for her performance, which is not so much that of a grieving mother, in the conventional sense, as it is of a woman who has lost her purpose.  What happens when that noun that has replaced all others, "Mother" is stripped from you in an instant.  How do the pieces that used to comprise your life fit together anymore?  These are the questions her character is faced with and a challenge which Kidman's demeanor seems perfectly suited to.  She is not so much cold as propelled forward into a world that none of us are ever prepared for.  What becomes utterly clear through the movie is that, despite the thousands of self-help books and the worn out cliches, there is still no socially defined way to grieve; it is perhaps, the last unspoiled emotion of humanity.
Eckhart is also fantastic, and is, unfortunately, a victim of a great "Actor's" year in the Academy.  In weaker years he would have been a shoe-in.  In fact all of the performances are heartfelt and appealing, and although the technicalities of the film lack the flashiness of most of this year's will-be nominees, which, all things considered is a unique offering from director John Cameron Mitchell, the script and the performances make this a film that should definitely be seen, and maybe even seen more than once.