Paul, Or The Movie that Reminds me Why Spielberg is Amazing

- April 14, 2011
Granted, this is late getting out, very late.  So late, in fact, that if you read this post and think to yourself, "Yes, I should definitely see this movie" you might want to check to make sure that your local multiplex is still having showings and haven't turned their theater over to be the 4th one screening Scream 4 for the weekend.  But sometimes tardy is the way life goes.  All that being said, if you're a fan of Simon Pegg, Nick Frost, Kristen Wiig, Seth Rogen, Jason Bateman, buddy movies, Spielberg movies, alien movies or pop culture in general you've hopefully already seen Paul.  If you haven't, for shame, immediately open a new tab in this browser window, go to your Netflix account and for crying out loud, put it on your queue, although, in all honesty, I'm saying this as a fan of all of the above.
Paul is hands-down the first movie that I've actually wanted to see in 2011.  I'm not sure if I'm actually getting pickier or if the pickings have gotten slimmer, but either way, it's the first one I've willingly handed money over for.  There was that weird incident with Just Go With It that happened about two weeks before Paul, but I liken that to a crack addict's need to hit the pipe.  It had legitimately been about a month since I had seen a movie in the theater and a friend suggested it and, like a thirsty man in the desert, I latched on to that offering.   It honestly wasn't as terrible as I was certain it was going to be, but that's the blessing of lowered expectations.  You're better off just watching 50 First Dates or The Wedding Singer on TBS for the 400th time, they both have better soundtracks.  Paul is a very different kind of movie.
The premise is fairly straightforward and easily gleaned from the trailer.  Two friends, and perfectly nerd-tastic comic book collaborators are on holiday in the US, primarily for the gathering of geeks known as Comic-Con.  Before departing back home (to England) they take a road trip that hits more than a few bumps once they run into Paul, an alien escapee.  The trick is to get Paul back where he belongs before he's caught, they're caught or all of the above.  Along for the ride is Kristen Wiig, as a devout cyclopsed creationist, Jason Bateman as a shady Government Man, Sigourney Weaver as Ripley from the dark side, and a host of other great cameos.  That's the short of it.  But when have you ever known me to stop there? 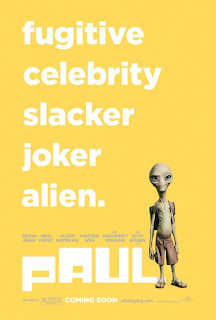 The premise isn't what's great about Paul.  What's great about this movie is that it's made by guys I love who also happen to love the same movies I love.  It's like the world's best inside joke.  As someone who grew up worshipping, and honestly, I still do, Steven Spielberg (two of his movies crack my Top 5, yeah, that's you Jaws and E.T.) Paul is like an ode to my childhood.  And it seems that it's that way for Pegg and Frost as well, and probably for most of the people involved in this movie.
For those of you about to get all up in arms, there are plenty of Star Wars references as well, as is usual when Pegg and Frost get together, and those are very much welcomed; however, those weren't the ones that I enjoyed so much the first time around.  There are the overtly, dialogue quoting moments, but there are also quieter moments of filmic celebration, and those subtle times are what really continued to draw me in.  My favorite is at the end, and I'm hesitant to talk about it, but suffice it to say, that great attention to detail was paid to a movie about a certain Reese's-loving non-human, right down to Gertie's teddy bear.  And you get the obligatory "Let her go you Bitch!" which is always a bonus in a movie with Sigourney Weaver in it.
Pegg and Frost are as enjoyable as ever (I mean really, is there anything these guys aren't appealing in?  Together or separately?...No?  I thought not) and Seth Rogen's voice was actually made for voiceovers I believe.  His voice is as much the heart of this movie as any of the other players and he makes Paul a lovable, believable character who just happens to be CGI.  I can't imagine that Greg Mottola (Knocked Up) had too difficult a time on this shoot.  In fact, I can't imagine anyone did.  Is Paul a vanity project?  Sure.  Is it the kind of movie I would want to make as someone who loves movies like this? Absolutely.
While usually I'm a stickler for substance over style, in this case, I'm willing to say that I will happily own this movie and re-watch it to my heart's content because it's easier than watching all of my favorite movies separately.

Overall: 4 UFOs.  I can't ignore the fact that some of the silliness is over the top, or some of the best dialogue is directly lifted or that you might be able to guess exactly where the story is going, but that doesn't mean I didn't enjoy the ride.
2011 Movie Reviews Nick Frost Paul Simon Pegg