Just last year, there was another train-related film released called Unstoppable.  Do not confuse these two movies.  While Unstoppable was highly entertaining at the basic popcorn-movie level, Source Code has a much deeper subtext and a much more substantial plot than even I expected.  And the odd thing is, it weirdly coincided with conversations I had been having in real life.  I get completely creeped when coincidences like that happen. 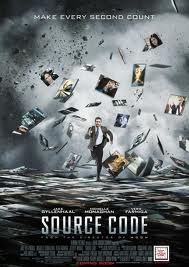 I had just recently been discussing the fact that I pretty much dropped out of science after my AP Chem class in high school.  I took advanced biology senior year, but let's face facts, I had gone about as deeply down the science rabbit hole as I was willing to go at 17.  Yes, unfortunately, I am one of those severely right-brained people who scoffed (in reality was too afraid of failing or being killed by) calculus and physics and so here I am, at 28, just now beginning to understand some of the ideas behind these areas.  Calculus I still could care less about, but physics has begun to burrow a hole somewhere in my brain and refuses to leave.  I say this because the ideas of physics, particularly the theories behind alternate existences and time travel, play quite a role in Source Code.  Surprised?  So was I, I mean, this was a March release.  However, it's not so entirely surprising when one thinks that director Duncan Jones' last (and debut) film was the highly acclaimed Moon, starring Sam Rockwell.  It seems like Mr. Jones might be another thinking man/woman's director, and that is something I am always interested in.
At its very basic the level, the film is an alternating of two scenes.  One is a commuter train that is/is about to/has been the subject of a terrorist attack; the other is a military base of unknown location.  Colter Stevens (the always delightfully stubbled Jake Gyllenhaal) is the only character who travels between these two worlds.  His mission is to go back to the start and find the bomber, and the bomb if possible, in hopes of preventing further terrorist attacks.  It's all part of a new military protocol in the war against terror.
While the notion of simply reliving the same 8 minutes for an entire 93 minute movie may seem a bit, well, monotonous to some of you, let me assure you, this film is anything but monotonous, as long as you're willing to dig a little deeper into your own beliefs on what really makes up the world.  It posits similar ideas as the fantastic and, sadly under-watched, television series Fringe in terms of opening up the thought of different or even alternate existences, which certainly helped in my appreciation of this movie.  However, while a television series has roughly 22 episodes to get its message across, this film does the same thing in a mere hour and half, which, in my book, is quite an accomplishment.  There is enough action and suspenseful beating-the-clock moments that I'm sure even those who are unwilling to dig deeper will find enjoyment in, but this movie is really one best enjoyed with other people who will also want to discuss the mind-blowing possibilities afterwards.
In a way, it reminded me a bit of Sunshine, the Danny Boyle film, and I'm not entirely certain why.  Perhaps it's because it feels like a film that will continue to reveal a layer of questions even after successive viewings, but I feel certain in saying that this movie is both more accessible and more optimistic than Sunshine for those of you who cringed when I brought up the latter.  There is also a sort of Run Lola Run set up to it, but despite my brain jumping to these comparisons it is very much its own movie.  It was an unexpected enjoyment in a more often than not dreary month at the movies.


Overall: 4 stars.  It's really difficult to argue with Jake Gyllenhaal and a healthy dose of thought all rolled in to one movie
2011 Film Reviews Jake Gyllenhaal Source Code