Goodbye -the double-edged Sword of Gryffindor of words

- July 21, 2011
By the time this finally gets put up, it will be a week since I've seen the movie the first time.  If you haven't seen it by now, I apologize if there's anything I give away.  I feel like there are so many things that I would like to say about the final Harry Potter film that there will probably be points where I ramble in this post, but please, if possible, stick with it and let me know what you thought too.  Spoilers Ahead so you might want to Expecto Patronum yourself from them, if you've yet to see the film, that is. 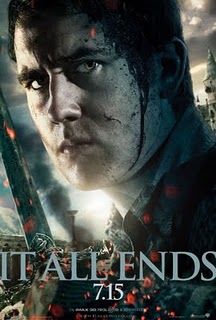 I'm not capable of judging this film as just a film, and it's my favorite movie of the year, so far, so of course, it gets:

I'd understand if the casual audience member gave it a lower mark, but still, it does stand out as one of the series best, I think.