- August 07, 2011
I'd like to say a couple of things to set the scene for my mindset going into this movie.  First, I remember seeing this trailer for the first time and then thinking "REALLY?!?! This looks terrible.  I will most certainly NOT be seeing this movie".  Secondly, on the Friday that I went to see this after work I was so beleaguered that when the young man at the ticket counter said "Next person" and I walked up, I said "One ticket for Planet Of ...I mean Rising Planet" and he said "I know what you mean" and I said "Thanks" in an embarrassed, but not overly embarrassed fashion.  I say this because I think that it illustrates the two key problems with this film: that it's based on a franchise that I'm still curious as to why it has yet to die out and the title is slightly ridiculous.  This second reasoning could just be me.
I was thoroughly prepared to ignore this film as I have other films this summer (you won't fool me again, Michael Bay!  I'm not paying for you to add a nitrogen tank to your Porsche!) and then an odd thing happened.  It started to get really, I mean, overly good reviews.  People started to bandy the word "Oscar" about in reference to something other than a garbage can, and suddenly I was confused.  I went, mostly because my roommates were going and what else was I going to do on a Friday night?  And I have to say, I didn't hate it.  That doesn't mean that I loved it either, but it means that, like several other films released this year, it evoked what seems to be my most reliable opinion of films of 2011 "it was better than I thought it would be".
Setting things up in a way that can best be described as a "prequel" to the 1968 film, Rise of the Planet of the Apes takes place in modern time (please don't ask me to explain how this makes any sense) set against the backdrop of Corporate America's love of money and a pharmaceutical company searching for the cure to Alzheimer's.  James Franco plays Will Rodman (to be honest, I had to look up his character's name on IMDB.  I couldn't for the life of me recall) a brilliant scientist/doctor who is desperately trying to rush a drug into human trials; a drug that will cure Alzheimer's, and, we find out, Will's dad Charles (John Lithgow).  Following a debacle that results from the side effects of the initial drug formula, Will takes his work home with him, to figure out his formula on his father.  He also brings home a baby chimp who, unknown to Will, has been genetically altered by the cure.  Charles, who while in the throes of his disease can only recite Shakespeare and tinker at the piano, names the chimp Caesar, and what follows is a relatively peaceful period of 8 years, while the cure helps Charles recover and Caesar grows into an adult (chimp). 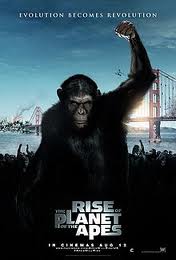 Then the fecal matter starts to stick to the wall.  Charles starts to relapse and Caesar grows rebellious, sending everything into a downward spiral.  Brian Cox and Draco Malfoy  Tom Felton make an appearance as a father/son team that PETA would really love to get their hands on, as Caesar is taken away from Will and placed in a "sanctuary".  It is in these scenes that the heart of the film lies, in these weeks that Caesar is caged, figuring out how he can break free.  It's a moving and engaging sequence that I wish hadn't been interrupted by cuts back to watch Will flounder at his job and the villains be superdy duperdy Villainy.  I was genuinely taken by surprise at one moment, which I don't want to give away here (because I'm sure you'd like to experience that moment too if you see this movie) but you'll know it when you see it.  It's a scene that's well done, beautifully-timed and despite the effects bonanza that is the "apes break out sequence" seems to me to really be the climax of the film.
Everything that is being said in other reviews about Andy Serkis is true.  What he brings to motion capture characters is something amazing and unique and here he gives such a solid central character in Caesar that it's easy to get caught up in the film.  The basis of the film is also plausible, much to the benefit of the movie.  I buy that some pharmaceutical company would want to find a cure badly enough to not let things like ethics or humanity get in the way of success.  I mean I'm sure it happens every day.  It is this believability that sets this film apart from the rest in this franchise, and I think, part of the reason that people are reacting to this outing with such wild enthusiasm.
But, for me, it did have its drawbacks.  I honestly didn't understand why Freida Pinto's Caroline is even in the mix.  She seemed like a wasted character, her only responsibility, being to separate Caesar from Will.  Beyond that, she brings little to the table, but I don't blame the actress, just the material she had to work with.  Secondly, the villains are so dastardly it seems like they spend their free time practicing cackles in front of the mirror and placing their fingertips together even when doing simple tasks, like deciding if they want a Baconator or a Double Baconator.  I mean, we're talking Hans Gruber but without the Alan Rickman-ness and the snappy one-liners.  And finally, I'm just not certain I buy James Franco in serious roles.  I know that might sound unfair, but I simply don't.  It always feels like the end of every one of his shots should have him winking at the camera.  He's trying so hard to be earnest that, for me, he falls flat and comes off false.  But then again, maybe he knew that he wasn't the main character, that Caesar is the main character, and so maybe it's not that big of a deal.
I enjoyed the nods to the original film; there's a scene where Caesar is playing with a plastic Statue of Liberty toy and one where Charlton Heston appears in all of his leather-clad glory (on a television screen).  And, of course, there's the "damn dirty ape" line, said with delicious knowing relish, but still I can't get over the moon about this one.  I liked Caesar, but never identified with him, although I know every kid under the age of 12 in the theater I saw it in now wants a baby chimp for Christmas.  I also thought that the ending of the Will-Caesar storyline was both irresponsible and unnecessary.  If he was just going to let him go, why chase him all across the bridge?  I know, I know, it's just a movie, and yet, I couldn't stop asking myself "why?!"

Overall, the effects are brilliant, Andy Serkis is genius, but everything else was just "ok" for me.