Deep Slider or Coverage of the ALCS Game 3

- October 12, 2011
Well despite the fact that this turned out to be a thoroughly bland game commentating wise, I captured what I could from the Fox crew.


I have to say a few things right from the start:

1. I feel like I should be slightly less sarcastic towards Tim McCarver since he looks like he's aged about 2 and a half years in a one year period of time.  I truly hope nothing is seriously wrong with him, but I can't find any confirmation because when I put in "Tim McCarver Sick" as a search in Google, for the next two pages all that comes up are pages like THIS. On the other hand, maybe he just stopped dying his hair and eyebrows to undergo the minor heart surgery I was finally able to weed out of the complaints.

2.  I'm pretty sure Aretha Franklin stole that outfit she wore to over-sing the National Anthem from my mom's closet.  I know that Aretha has had some rough patches, but you're the Queen of Soul, you can do better.  Just because I can, let's get this game started off on the right foot.  You can take your pick of Marvin or Whitney

3.  Fox, I'm all about the pomp and circumstance of big sporting events, I'll even give you your ridiculous side videos, but for crying out loud, cut the "pre-game" show down to 5 minutes and just have everyone say this line: "whichever team wins tonight, it'll be the team to score the most runs".  We understand, I promise you.

Austin Jackson needs to get on base.  He says he has three keys, but that's the only one he talks about.  I'm guessing Jackson, Cabrera and Martinez are his three keys.

Then Buck utters the phrase "Turn The Page" and yup, you guessed it, a dramatic montage of the players getting ready for the game.  Fox is so clever

At 8:39, we have our first cut-away DURING THE GAME to check in on relaxed Tim & Joe.  Just a couple of dudes, sans sports coats, hanging out shooting the bull, because, after all, that's what you tuned in to see right.  All of this baseball stuff is just a prelude to the chat.  Good thing they cut away so we could see that awkward high five. 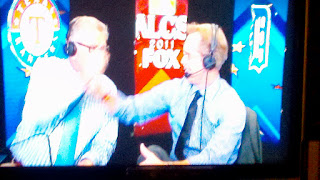 During the "Ump with the Mic" bit, we hear Jim Wolf ask the batboys they're nicknames and then proceed to tell them to call him Wolfie.  Just don't get into his white, windowless van boys.  I can't believe that this is what Fox spends their sports budget on.

There's a tiger with glowing green eyes somewhere at Comerica Park.  It's like a flashback to Big Trouble in Little China without ever having taken acid

- "Sometimes pitchers get impatient...and they don't make a pitch bad enough"  (I know, my brain is struggling to wrap itself around this too)
- "Sleep in November " (after Beltre hits a foul off of his shin, I think it's his version of 'walk it off')
-about Nelson Cruz "He may be the strongest guy in either league...and that means the strongest guy to hit a baseball" (8:29)
-The "deep slider"  (it slides... deeply)
-"If sliders don't go down, they go out" (I just hope he's still referring to baseballs and not his most recent Chili's experience)
-"And the Tigers are not the type of offense that's going to score runs with their legs"
-On Old Spice Ads "Classic!"  Joey B. does offer up that he thinks "Geicos are good".  (Phew I was wondering what they thought, had been wondering for like a year)
-Watching Adrian Beltre hit the deck after yet again hitting the ball off of his leg "Boy that had to hurt"
-"It's tough to play in October without something bothering you"
-"I've heard different theories on those oblique injuries...we're not saying that that's what Victor has...a lot of people think it might be pumping iron too much".  (Are teams now employing an army of 1985 Arnold Schwarzennegers to help condition the players, welcome to 2011 Timmy)
-"This guy's a winner...that might be, when all is said and done one of the best things you can say about a player"
-"Sleep in November" (again, I swear, when talking about the Tigers arriving at 5:30 am before this game)
-"You don't have first base open, but you do have an open base"
-"You know what Tiger fans are saying tonight...if we win tonight then that gets us to Verlander" (I didn't know that Tim was so psychically tuned to the entire Tigers fandom, but who am I to question)

-Terry Francona is driving somewhere in the South saying that he knew that Kinsler would jump on the first pitch of his first at-bat at some point.  (I don't know how much of any of this is true)
-He yet again says that Francona is driving somewhere in the south with his daughter.  (I'm beginning to think that Tito's new job is going to be as a character in a John Grisham novel.)
-"that's a lot of body into that swing" (on Miguel Cabrera's home run)

-cryptically twirls his bowtie and talks about the rumor that Boston Red Sox GM Theo Epstein might be going to the Cubbies.  If you'll notice, Boston is nowhere near this game.
-Home Depot starts talking about the trade between Seattle and Detroit that got the Tigers Fister.  Kenny is like the Fox equivalent of Walter Winchell