The Girl With The Dragon Tattoo (aka Payback's A Lisbeth)

- December 21, 2011
When I first heard that Hollywood was getting its gold-plated grubby hands all over the hugely popular Millennium Trilogy to essentially re-do what was an equally popular Swedish series of film adaptations, I quickly found a soapbox and told anyone who would listen all of the usual arguments:

-This was pointless
-It was for people who were too lazy to read subtitles (which, in fairness still may be true)
-Yet another uninspired, unoriginal idea that would be served up to the masses in place of something worthy
-There was no way it could possibly be as good as the original.

I'll admit that when I jump the gun, my opinions are neither logical, nor is there any reasoning with me.  I'm right and that's the end of it.  And then, oh so slowly, details about the adaptation began to trickle out. Daniel Craig was cast as Mikael Blomkvist...well, crap.  Rooney Mara, fresh off of her short, but impressive turn in The Social Network would replace (Noomi) Rapace (did you see what I did there) as Lisbeth Salander...well, interesting at least.  Oh, and David Fincher would be directing it...well, dammit!  Hollywood had dangled the bait and like the sheeple that I sometimes fear I'm becoming, I fell for it; though I have been attempting to reign in my expectations. But after having seen it, I have come to the conclusion that, while I'm still not entirely wrong, perhaps waiting and seeing is a more beneficial approach to the entertainment industry, although I doubt I'll ever fully train myself to be just that patient.

In case you have remained willfully deaf to the screaming of pop culture, the Millennium Trilogy follows the story of Lisbeth Salander, (Mara) a computer-hacking research phenom with a murky past and her unlikely relationship with Mikael Blomkvist (Craig), an investigative reporter who, when we meet him, is on the losing end of a libel scandal.  The first installment, The Girl With The Dragon Tattoo, follows Lisbeth and Mikhail's seemingly divergent paths until necessity forces them together to solve a mysterious murder on a remote island in northern Sweden.  To the basics of the plot, Fincher stays faithful:

Mikael Blomkvist, on sabbatical from his journalistic duties at Millennium magazine after a fall from grace, accepts a job working for the wealthy industrialist Henrik Vanger (played here wonderfully by Christopher Plummer).  He is to masquerade as a biographer for Vanger, in order to plunge to the roots of the Vanger family tree to unearth a secret that has plagued Henrik for nearly 40 years: who killed Harriet?  Harriet, Vanger's great-niece and the favorite to take over the family business must have, according to Vanger, been murdered by a family member.  When Blomkvist finally decides he needs a research assistant to help him sift through 40 years of notes and photos, Salander is contacted, and thus begin the twists and turns of the thriller.

On the whole, the film is more of a return to form for Fincher.  While I still think last years The Social Network was a more intriguing film, this one is closer to a David Fincher movie than that odd misstep, The Curious Case of Benjamin Button.  Re-teamed here with Trent Reznor and Atticus Ross, the music fills some of the surprisingly long dialogue-less moments with an industrially-cold atmosphere, that's fitting for both the characters and the locations.  Ironically, that chill is perhaps the only problem I have with the film.

While The Girl With The Dragon Tattoo is a beautifully shot film, mostly thanks to the clean, modern lines of Swedish design and the freshly-fallen-snow landscape, the characters on display here are rarely more than two-dimensional.  I don't really blame any single factor; everyone on this production was wedged between the proverbial rock and hard place.  Still, coming in at a whopping 158 minutes, one would think that there would be more of an attachment to characters.  For me, it was impossible to forget that Daniel Craig, was, well, Daniel Craig (part of which was only exacerbated by his non-existent Swedish accent) and that Rooney Mara was trying so very hard to be Lisbeth, or maybe I should just blame the bleached out eyebrows. 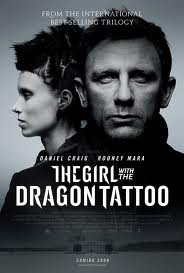 The problem inherent in Hollywood remakes is that they're Hollywood.  I think what the original film had going for it was that, at least to foreign audiences, Michael Nyqvist and Noomi Rapace were relative unknowns, with little that needed proving.  Here there were just too many obstacles to overcome.  The entire story relies on the chemistry between Lisbeth and Mikael, and here it just felt slightly forced.  Rooney Mara's Lisbeth seems to have ratcheted up the vengeance factor, and in an attempt to avoid the unavoidable comparison, has overcompensated by going for a performance with less ability for connection with the audience.  Lisbeth is not designed to be warm and fuzzy, this is true, and I'll say again, that for this film, if this is the first one you're seeing, then this might not seem like such an important issue.  Everything about this film fits, as it stands, but it just feels like there were still aspects of the drawing that weren't entirely colored in.  The relationship between Erika and Mikael is convoluted, the other office workers are largely ignored, which is a shame since Joel Kinnaman (the best part of AMC's The Killing) has been cast if only for the briefest of moments, so don't blink, and Mikael's relationship with his daughter and sister seem simply perfunctory, not really a part of him as a person.

But, as with most David Fincher movies, what it can never be accused of is lacking in style.  The opening sequence is reminiscent of all of those great James Bond movie openings and is appropriately (for so many reasons) set to a re-make of Led Zeppelin's "The Immigrant Song" featuring Karen O from The Yeah Yeah Yeahs on vocals. Not only is this a film that does indeed take place in the land of ice and snow, but it also focuses on a family whose ties to the Third Reich are one of the many disturbing issues that have separated them.  This is a more than adequate remake, although still unnecessary, and again, puts Fincher in the spotlight, which is a good thing.  In other hands, this could have been a mess, but in a weak year for movies, and with a story that itself is involving, it's an entertaining, disturbing, intelligent thriller that, should you choose to see it, will not cause you to feel as though you've wasted your time or money.  But if you're squeamish, you should go in knowing that Lisbeth Salander is not a girl that a misogynist should mess with and should you disrespect her in any way, there will be her own form of private hell to pay.

Overall: 4 out of 5 (If you've read the novels or have already seen the Swedish versions, just go in prepared to view them as completely different vehicles of storytelling)