On The Bookshelf: 50 Shades of Grey

- May 21, 2012
I debated on whether or not I should keep this a shame-filled secret, much like my journal that ranged from the years of 12-19, but unlike that book, practically everyone and their grandmother, and sometimes generations in between have already read this book, so what's the harm in admitting that yes, I have read 50 Shades of Grey.  This will be my attempt at reviewing it.  Spoiler alert:  It's a book about sex.  Having sex, talking about having sex, thinking about having sex, texting about having sex, with a teensy bit of emotion and more sex thrown on top of that.  That probably should be the end of the review; however let me start at the beginning, just to feel as if I've accomplished something this evening.
50 Shades of Grey is the story of the (mostly sexual) relationship between a girl, Anastasia Steele (quit snarking, this is serious ok?) and a boy, Christian Grey (duh).  Anastasia, or Ana to her friends (who are kind of crappy and mostly out of the picture, because who has time for friends when you're wandering around bow-legged from all that kinky insanity) is a college senior, who in this day and age has managed to make it to 22-ish, and still remain a virgin.  Christian Grey is a multi-millionaire (at the very least) who has his own helicopter, the ability to buy Porsches and Macbooks on a whim, and a pretty swanky bachelor pad, that Ana soon discovers is outfitted with a neat little chamber of love.  Their meet-cute is that Ana is going to do her friend a favor and interview Christian for the student newspaper but asks a bunch of embarrassing questions.  Instead of being turned off by this lack of professional decorum, Grey is turned on, in that way that multi-millionaires are fascinated by the decidedly mediocre average class.  He MUST see her again.  He just CAN'T get her out of his mind.  Of course. 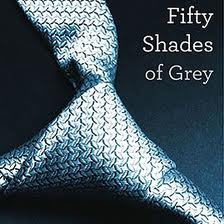 Overall: 2, because, well, at least it wasn't boring, or at least 80% of it wasn't boring, and the rest you can always skip quickly over, like a soap opera you're returning to after a 6 month break, you'll find you won't have missed much.
2012 Book Project 50 Shades of Grey