On The Bookshelf: The Magicians


I had high hopes for this novel, I really did.  I swear to you that I went to the bookstore and picked it up several times, always putting it back down simply because my towering pile of bound escapism was already too tall (or because my paycheck had yet to have its deposit finalized) but I never forgot about it.  I could always find its cover: a solitary tree in the forefront, leaves scattered at its trunk, 3 other trees distanced in the background, glazed over by fog.  And then, of course, there was the title itself.  I mean it's called The Magicians for crying out loud.  As a Harry Potter fan, and someone who, apparently, just cannot stop herself from reading about other realms, why in the world would I pass this up?  I seem to remember there being a lot of buzz about it, but it could just be all imagined, revisionist history wreaking havoc on my thoughts.  All this context now given, it's difficult for me to say this, but I was, underwhelmed, to say the least. 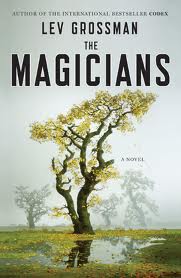 The Magicians is the story of Quentin Coldwater, a teenager from Brooklyn who has already decided that the real world sucks.  Like I said, he's a teenager.  Quentin has lived his life in a grey haze of attempting to suppress his, self-proclaimed, outstanding intellect, while simultaneously becoming one of the world's biggest fanboys of a fantasy series based around the world of Fillory (go ahead and substitute Narnia here).  Aside from school, his disengaged parents (I'm still not quite sure why Quentin couldn't stand his parents, they seemed perfectly fine to me) his only other connection to the world are his two friends Julia and James.
One day, as he's about to be interviewed for a college scholarship, Quentin, magically, believe it or not, enters the grounds of a prestigious magical school named Brakebills (Hogwarts).  Since he's always believed he's better than the rest of us earth-bound banal beings, combined with the fact that he's always had an affinity for card tricks, Quentin is practically a shoe-in for acceptance at Brakebills despite the deliriously difficult entrance exam.  Trust me, it makes writing an essay for your run-of-the-mill university/college seem an absolute cinch.
At school he meets several other students, the most prominent among them Alice, Eliot, Janet, and Josh.  You see, much like your run-of-the-mill advanced education, Brakebills eventually separates students into the magical equivalent of majors and, as these things happen, Quentin is placed in the most elite circle; the theoretical physics group in a sense.  It's somewhat ambiguous as to what their actual skills are but as a group they go by "The Physical Kids", and if you think like this sounds like a great name for a band out of Brooklyn that more than likely has a synthesizer, I wouldn't disagree with you.  After graduation, incapable of joining the real world, "The Physical Kids" find themselves in possession of an unlikely artifact that, upon testing, helps them enter the realm of Fillory, and that's where the secondary quest begins.
Now the summation of this plot sounds like there should be a lot going on.  There isn't.  Essentially, the first half of the book is mostly a prolonged whining of how Quentin's always felt he doesn't belong in the world.  The second part of the book does finally become interesting, but quickly resigns itself to moping again once the magic wears off; the third section is supposed to ramp up the excitement by leading up to a penultimate battle, before finally entering the cool-down phase of this post-adolescent workout.  The problem is, the action is sparse and the middle is filled with character development that should be more interesting, if you cared about the characters.
This is certainly a personal observation, and will likely differ amongst readers, depending on who you ask, but I just simply found nothing about any of these characters that made me care for them.  I'm sure this is meant to be some sort of commentary on our current generation and our blase attitude towards the meaning of the world we're surrounded by, or perhaps about that time in our lives where we're all supposed to feel as unapologetically and undeservedly entitled as this elite group of magicians, but something was lost in translation for me.  Add to that the fact that the novel so clearly, almost vulgarly, borrows from already-established fantasy franchises and it really feels like the amount of originality has been compromised.
The saving grace is that Mr. Grossman does, often enough, know how to turn a phrase.  Even if I wasn't always awed at what was being said, a majority of the time I did quite enjoy HOW it was being said, and there is certainly something to be said for style, which is about the only thing that kept me going.  I stopped for lengthy swathes of time with this novel, with little momentum to keep me interested, but should you decide to read it, I did find the Brakebills South section thoroughly engaging.   The fact that this is supposed to be the first part of a trilogy is quite curious to me.  I feel like this novel could have very easily ended, in and of itself, about 10 pages before the actual end, with a lesson learned, and perhaps a redemptive moment for Quentin. Instead a long-forgotten character is resurrected and a sloppy ending is tagged on for what I feel like must have been the publisher hastily calling and barely managing to stutter out "Post-Hogwarts Harry Potter for hipsters?! How many can you write?"  If this franchise hasn't managed to catch on, it's because the wonder of magic is nowhere to be found.  I'm sure that's the point, but that doesn't mean that it makes circling the drain of talented cynicism any easier when you've just returned from a mind-numbing day in a cubicle and are looking for a little respite yourself.