- June 19, 2012
When I was 13(ish) I read both Wuthering Heights and Pride & Prejudice.  It was at that young age that I decided that Heathcliff and Catherine were whiny and overly emotional while Lizzie and Darcy were awesome.  My adoration of Ms. Austen started with that simple truth.  While I can't claim to be an absolute Austen aficionado, I am certainly farther on the "fan" end of the spectrum than many people.  I bristle when insults are made, whether about the author, or the characters, within my hearing distance and, when engaged in debates I've been known to become fiercely protective of both my fictional and non-fictional role models.  That is why, it's with some trepidation and no small amount of shame that I must now admit that this is my first reading of Northanger Abbey.
I've seen the BBC adaptation, of course, I own it, in fact, so the story itself was familiar, as was the history of the book.  The first of Jane Austen's manuscripts to be completed and sold, Northanger Abbey remained unpublished until just months after her death (posthumous sales have always been part of the PR hand book, I suppose) and is also her most overtly satirical novel.  Perhaps it had just been a long time since I'd read any Austen, but Northanger Abbey was funnier and more biting, with such a distinct voice that I was sorely tempted to instantly place it above Pride & Prejudice upon finishing it, but I'll be judicial and wait to see how re-readings of it hold up. 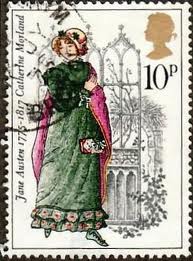 Revolving around 17-year-old Catherine Morland, a regular girl from a home of no particular consequence with not the best of connections, but not the worse of connections, it's the story of what happens when our imaginations, or more specifically female imaginations,  run wild.  As a girl in a home with slightly more consequence than the fictional Morlands, Austen was able to observe the very basics of human nature, at least among the British ton, as well as the literary patterns that not only commented on societal stereotypes but fostered them as well.  At the time of Austen's work, the Gothic novel had taken a particular hold on the younger generation, being widely read but not greatly acknowledged, considered something of a taboo.  They were pretty much the equivalent of Fifty Shades of Grey but with more class and less riding crops.  However, the fact that they were  novels and not literature of a more solid, educational basis, designated them as a predominantly female pursuit.  As such, the initial appearance of Catherine Morland is that of a somewhat frivolous, though good hearted and intelligent (for her station) girl.  In her adventure to Bath, Catherine meets two wildly different kinds of people.  The Thorpes are all show; pomp and circumstance designed to hide an unfeeling, careless interior.  The Tilneys, however, are a slightly more traditional, regimented family who are caring and easily attached underneath the cold facade.  Before ultimately having to choose between these two groups, though, Catherine is deterred by her own over-active imagination.
Austen is more than aware of what is expected of a girl like Catherine in society: she is to be presented, find a husband, and married off with as much haste as all the rules and customs of asking permission and setting aside an annual allotment by her family will allow.  And, while the layout of the plot is the tactile satirization of of the Gothic novel, following the romantic format of a heroine's journey to self-discovery and ultimately love, it is the breaking of the fourth wall, if you will, that Austen often engages in, that outright mocks those societal obligations.  I couldn't stop myself from finding sardonic observations about female nature that now I can laugh at and find wonderfully sarcastic because I'm no longer bound to ask my father for a goat before marrying someone above or below my non-confining station in life.  I couldn't help but find myself wondering often what Austen would think of and write about this world where women are no longer judged by their pounds per annum, but merely their pounds and inches.  Sometimes it seems as if we're not so far away from the world in which she lived and other times, we are so far removed.
I think what I found so refreshing about Northanger Abbey is that it's clear that it's written by a young woman with slightly more abandon than the more refined (and edited) Pride & Prejudice and Sense & Sensibility.  It feels somehow more honest to what Austen really felt and thought.  Austen openly acknowledges that what people are looking for in novels are the required push and pull of heroine and hero before the ultimate happy ending and she allows for this all to happen, plotwise, while pointing out these requirements in the stylistic choice of choosing moments to narrate in her own voice, making it seem like a more two-dimensional story.  As the reader, you're not only reading to follow the plot, but sometimes you're caught off guard when the silliness of the accepted pattern are pointed out to you.  What it proves beyond anything is that Austen was always in on the joke, and that, more than any other reason, is why she was able to write characters that have endured.  Because, in addition to their humanity and fallibility, her characters, her great characters, were never allowed to take themselves too seriously.  Their dreams, their wit, their intelligence, their societal expectations, and their family obligations may have been serious, but if you think too highly of yourself in an Austen novel, more than likely, you're going to be the one licking your wounds at the end, not mourning over your oh-so-tragic soulmate.  It may just be me, but I like to think that what prompted Austen to write a novel like Northanger Abbey was reaching the conclusion of Wuthering Heights and rolling her eyes, and then gleefully tucking in to a more ridiculous novel that involved the prospect of secrets waiting to be uncovered in a castle whose windows shook when the winds of a storm howled past.