- September 05, 2012
Well it's time for the Top 6 and I am both sad to see the rapidity with which this season seems to be ending and excited to see if there are still some awesome routines up some choreographers'/dancers' sleeves.  I'm going to change up the layout of the review slightly, since there are only six dancers left and since they'll all be dancing 3 times (yeah, seriously). I'll be keeping track in terms of each dancer, not in terms of the show's chronological order.  I have faith you'll be able to keep up.

Let's first dispatch with the technicalities though, shall we?
The Intro Group Dance was done to Scream by Kelis
And YOUUURRRR Judges are: Nigel, Mary and Christina Applegate

All-Star Dance
Partner:Benji
Style: Jive
Choreographer: Jean-Marc Genereaux
Song: What I Like About You by Lillix (yeah, the version from Freaky Friday and 13 Going On 30)

To be honest, I'm just jealous of their conditioning in order to get through that routine.  There's so much energy and a ton of precision and some good lifts.  It gets a standing ovation and Benji cannot stop being touchy-feely with Tiffany.  Nigel is simply effusive telling Benji he's the best swing dancer they've ever had and that Tiffany kept up amazingly.  Mary uses both  the term "jive chicken" and "patooties" in consecutive sentences. Christina is relieved that Benji didn't overshadow Tiffany and that her "flicks were fabulous".

Solo
Song: Just The Way You Are by Carmen Reece
Her musicality is awesome in this piece

Whitney's costume might be my favorite of the season.  I'm seriously digging on the biased cut pale pink chiffon/short train skirt.  The routine is also a great redeeming moment for Whitney.  It's a reminder of her versatility after a lackluster solo.  Mary thinks they worked beautifully together; Christina liked the routine but thought there was a little too much "Hairography" but everyone who watches Fox knows that Christina didn't make anything new up, right.  Nigel says they've saved her because the choreographers all think she's a star.

Solo
Song: Malaguena by Brian Setzer  (remember when the revival of Woodstock was a big deal, before Limp Bizkit, legitimate rapes and bonfires put an end to it, I mean I'm sure those weren't the only things, but I like blaming Fred Durst whenever I can)

I'm uncertain about the idea of a singular Paso Doble.  It doesn't seem to have as much passion as some of Whitney's previous solos.

Ok, this pairing is probably the one I'll be most excited about for the night.  I really love both of these dancers and think that they could compliment each other really well.  It's not as flashy as Tiffany's jive, but there are a lot of really great moments.  What I love about Melanie is that she is just such an unapologetically strong dancer.  Mary liked the dance and thought that it was great to see Melanie lifting Cole; Christina Applegate earns a bleep from Fox and Nigel thought that he adapted really well to this style.

Solo
Song: Night Of The Wolf by Nox Arcana
Ok, first of all, Cole's mom seems awesome and adorable, "you go kick BUTT!".  Cole also looks like he's borrowing a bit from Cyrus in the beginning. It makes me wonder did the guys have a secret pact tonight to exchange styles?!  But then his movements become so fluid and so crazy strong.  I just like this guy.  In my mind, he's definitely the strongest male in the competition.

I don't know if it's just an odd song choice, or the feeling that this piece was overly-dramatic to begin with, but I didn't really feel all that moved.  I felt like I SHOULD be moved, but I wasn't so much.  Nigel fawns over the amount of EMOTION in the routine; Mary gets really teary and says it was one of the best routines all season; Christina calls Tyce a "master" and says that there's never been anyone like Chehon "technically" on the show and now she's crying. I must have missed something, I'll re-watch, but it just seemed so odd to me.

Well after milking his mother's appearance for a cry-worthy interview, he bursts in with a routine that I think is trying to incorporate other styles (which is good) but which looks like it borrows a lot from Cole's style.  Just me?

Ok, seriously, this is a genius song choice.  And suddenly I want a Dirty Dancing sequel where Twitch Johnny Castle's some suburban sixties girl in the art of hip hop.  It's fun and challenging with some intricate moves, especially when the drum kit kicks in, there are so many things happening so quickly. Christina thinks Eliana can do anything; Nigel reiterates the 'favorite girl' spiel but he felt like the routine wasn't dance-meaty enough for him; Mary says that yes, the routine was fun, but no matter what, Eliana makes every routine memorable.

Solo:
Song: I Will Follow You Into the Dark by Death Cab for Cutie
I like the song choice, so that might make me a little biased but her movements feel so genuine and the skill it takes to carry off her more gymnastic, Cirque Du Soleil moves is something I'm in awe of.

I have no idea what to say about this routine because it's amazing and even more than usual, I have no idea how they get their bodies to move the way they did. The choice of song and story of the piece are great and work perfectly for their style.  The intricate pops and locks pretty much have me dumbfounded.  There is no denying that I think Cyrus has to have, if not the best, then one of the best personalities on the show and his sheer joy at the end feels infectious.  Christina does bring up the fact that the routine was "carved out" for Cyrus; Nigel brings up the fact that Cyrus has never been in the bottom two; Mary says "we love you because you CONNECT!" and then makes a terrible pun about being in Cyrus' "Comfort Zone"..everyone silently boos...

Chehon & Whitney
Style: Cha Cha
Choreographer: Jean Marc Genereux
Song: Where Have You Been by Rihanna (this is at least the second time this season with this song, correct?)

First things first, Chehon misses that lift.  Of course Whitney shines in her home genre, but still there was something that felt like a setback for both of these guys.  Mary A) babies Chehon to the point of whining and then calls Whitney "Lindsay"; Christina says she didn't see anything wrong at all; Nigel calls Chehon out on the lift and that he wanted to see more of Whitney's hips and says that he thinks Jean-Marc played more to Chehon than to Whitney.

Yet again, Cole is yolked with the theme of "hatred" and literal battering rams. There is no way that any other dancers could have done this piece and the end, again with the silent screams berate us with DRAMA!! It works, mostly, but it was a bit heavy handed for me.  All of this silent screaming was just desperate for an Edvard Munch reference: 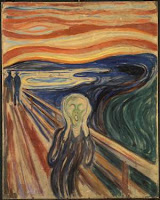 Still it was beautifully danced by both of them.  Nigel says Eliana "this is why I love you dancing"; Mary says that the transitions were seamless and the strength and the...she babbles a bit, honestly and doesn't really get to finish her thought; Christina says that it seems like Eliana has light coming out of her feet.

Oh, those old days when women could just ask to be treated legitmately rough.  Ok, I lied, Tiffany's costume for this piece is my favorite, mostly because cardigans are amazing. It was fun.  As with all things Broadway it is all about the character and despite the fall out of his pirouette, he does keep up.  Christina loves the routine; Nigel thinks Cyrus is inspirational; Mary calls them cutie birds.

Before the results, I have to say what I love about this show is its dedication to showing such complete diversity in dance.  Seriously, check out Oakland's Axis Dance Company

Holy Crap, Cole is out.  I'm stunned and a bit bummed if I'm serious.  I think the girls' final will be more interesting than the boys' final.  I'm officially disappointed with this season, but so goes life.  Hopefully Cole will be back in future seasons as an All-Star, he deserves to be.  So don't forget to pre-record your DVRs for next TUESDAY, people, TUESDAY.  I'll be back, if I'm done pouting after six days.