- November 20, 2012
Warning: If you're looking for a serious take on the "saga", please look elsewhere.  It's been a while since I've seen a movie that I spoke out loud in the middle of (in the theater, but mostly under my breath so as not to disturb the other invested patrons who had also spent hard earned money on this experience) and I'm about to release my snark puppy on the world, so if you're a seriously-in-love with the saga fan or can honestly claim to be Team Edward or Team Jacob for life (I'll leave it to you to put in Team Edward/Jacob tattoo in Google Images and see what wonders await) what I have to say may or may not be to your liking.  I take no responsibility for your reactions or feelings. And there will be spoilers.

Well, I broke my own rule and I only have myself to blame for it.  My rule was simple.  DO NOT give in to Stephenie Myers.  I'm not sure what possessed me, honestly.  I mean I have a theory, but that's all it is, no solid proof.  My theory is that I have a genetic disposition to a syndrome known as Endism.  What that means is I have a compulsive need to know how long, drawn out stories end, even if the emotional investment is low. If I haven't moved every single penny from the "I Kind of Care" account to the "I don't give a crap" account, well there's still something to go back for.  I have no DNA evidence per se, but I can testify that sometimes I walk in to Barnes & Noble and if there's something that looks interesting, but not THAT interesting, I just read the first two pages and the last two pages of a book, honestly, just because I have to know.  This syndrome also flares up when triggered by other major pop culture events. Some I've seen through to the bitter end, patiently waiting for each morsel of story.  Harry Potter, Game of Thrones, Doctor Who, well at least the Pond storyline. I've read the books  as they've been released, watched the episodes on time, not AHEAD of time (thoroughly pirate-free for me, matey), and I enjoy the suspense.  Heck, even, or perhaps especially, N*Sync, man I stuck with those guys to the bitter end, from their very first Disney concert special until it all came off the boy band tracks.
But there are other things that I just simply don't have that much time for.  We only have one life to live and I can only get invested in so many sagas.  Sometimes you have to put a phenomenon out to pasture to make way for more interesting things, like say, Fringe.  Anyway, at one point in my life, I got swept up in the Twilight fervor.  I bought the books on (exhibit A) recommendations from others.  (exhibit B) I was also young(er) (ish).  Ok, I should have known better.  But sometimes you don't care.  Sometimes you throw Caution to the wind.  And then sometimes Caution comes back and covers your face so that you can't see where you're going and you fall over that uprooted tree right into that smelly, muddy bog and then you only have yourself (and Caution) to blame.
Twilight has now landed me in that bog  several times.  The first time was when I bought the books.  All four at once, because, well, obviously, I was going to see this thing through.  Only I didn't.  I stopped reading at Eclipse because it was just too painful.  These are terribly written books people.  I'm not saying anything against the story.  I mean it's not groundbreaking (boy meets girl) but it's      defend-able. The writing itself? Well, there's no defense for it.  The second time was when I ponied up for the first movie.  The third offense was New Moon (which, of the story, is my 'favorite' if you get mediocre favorites) and the fourth has been this movie.  I skipped Eclipse and the first Breaking Dawn.  I thought I'd finally kicked the habit.  But like they say, fool me once, shame on you, fool me twice shame on me, fool me four times, well, congratulations Stephenie Myers, you've proven to be my very own Waterloo.
So there I was in the car, on my way to theater, already sensing that this was a bad decision.  In the same way that when you're stuffed but you look at that dessert menu and what stands out to you isn't the small serving of sorbet but the gigantic, exploding, gooey chocolate lava cake.  This was a chocolate-lava-cake bad idea. Still, I had to know and thus, my Endism hubris had taken hold.  I don't know what exactly I needed to see.  I mean I already knew that BED-ward were an officially married item (by the way, how is the country not more against hybrid vampire-human marriages...what about THEIR tax status?!) I knew a lot of stuff, because I had Wiki-spoiled every gap that I felt needed filling in once I'd discarded Eclipse.  Still, there I was in the theater, surrounded by a somewhat surprisingly diverse crowd, awaiting the last of the chapter....and then suddenly there was fuzzy Edward. 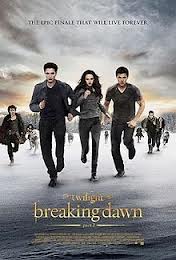 Oh man, this was a fun one.  It's so incredibly unnecessary.  I refuse to believe that they couldn't have finished off the story in four movies instead of five, but god bless that grazing cash cow.  The effects are awful.  Have they been this bad in the movies I didn't see?  If a tree falls in the woods will a vampire catch it and make firewood?  Who knows.  The writing is about on par with the books, so you pretty much know if there were screenwriting delusions of grandeur, someone's going home frowny-faced when the Oscar nominations are made this year.  It's just so melodramatic, but maybe most of them are in on the joke.  Maybe it wasn't just Michael Sheen.  I'm pretty sure Lee Pace is in on it.  I'm not sure about the others.  But overall, the things I was happiest with in the movie were Jacob's strip-down scene and my nachos and cheese snack bar decision.  Still, it did make me laugh.  Oh man.  I might have paid that green goodness to the pied piper and it might slowly find it's way to Ms. Myers, but the laugh I had once I got in my car was easily worth at least three of the six dollars I spent to get in.

Like I said, I only have myself to blame.