- March 28, 2013
Ugh...March.  It's that absolutely terrible, wonderful month filled with the last annoying remnants of winter and the hopes of a beautiful spring.  We here on the East Coast are still threatened with snow while there are enticingly warmer temperatures in places south of the Mason-Dixon line.  I mean those places are always warmer, but for some reason when you hear that it's 60 in Miami in January, you just think, "of course it is" because it could NEVER be 60 in Connecticut in January.  But when you hear it's 65 in March, it seems like an evil, teasing hoax because you're **THIS CLOSE** to spring, but it's still just out of reach.  Since March is the first of the longest months, meaning that January has all of those random historical people holidays and the New Year's Hangover while February packs a wallop in just 28 days, most of the time, but in general, unless you're Irish or a huge college basketball fan, March is mostly just treading water.  I like to spend the last two weeks of March daydreaming about pastel color palettes, longer days, and the burning of my winter coat.  Ok, I actually really like my winter coat this year, so I won't burn it, but I will gladly banish it to the back of my closet and secretly hope that I'll never need it again, but I won't tell it that, not to it's toggle.  So as the month draws to an end and 50 degree temps start creeping up at a more consistent rate, here are the top 5 things from my March 2013.

Neverwhere on BBC Radio 4-If you haven't read Neil Gaiman's captivating Neverwhere or you don't have any time to, you know, read, now's your chance to experience the world unlike any other without having to crack a book.  Because the Brits do pretty much everything better, at least when it comes to artistic pursuits, they've done a radio drama.  Yes, a radio drama, like there used to be before the boob tube took over and advertisers got all crazy.  Only this is no ordinary radio drama.  The cast includes James McAvoy and Benedict Cumberbatch among many nerd lovin-worthy others.  Catch it while the episodes are still available 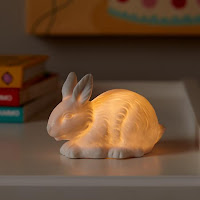 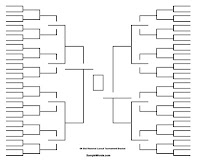 Rabbits -I'm not sure if it's the Easter season or if I just really finally want a pet of my own that MAY be slightly less maintenance than a dog, but I'm really obsessed with rabbits lately.  Blogs of rabbits, nightlights (pictured), rabbit sweaters, earrings, but my favorite has to be this mind-blowing tattoo.  I want a rabbit, soon, and I'm thinking of naming it Fitzwilliam.  Don't judge me


Brackets of every kind- Only in March can you get away with an overabundance of tournaments taking place in the form of the NCAA brackets.  There's the Star Wars character tournament "This is Madness", Ript Apparel's Tee Madness  bracket, Paste Magazine's Top of the Hops Beer bracket, along with many, many more for the person who can't get enough of office pools.

The Veronica Mars movie  -You better believe I contributed.  I'm eagerly anticipating getting my t-shirt, and if it arrives before the movie is released, I will probably wear it to the theater.  I stand by my conviction that the first season of that show is absolutely flawless.  A rare feat in television. 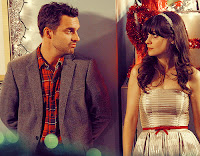 The return of good television - Granted we are probably living through a golden age of television right now, but even good tv can sometimes have lackluster weeks.  March will see the return of Doctor Who (YAY!) and Game of Thrones (YAY-ER!) as well as having seen the continuation of one of my favorite couples to ship New Girl's Nick and Jess (YAY-EST!)

Also collecting heart necklaces, moving, and trailers for summer movies are getting me psyched.  Hope you're as ready for spring as I am!
Doctor Who Game of Thrones Neil Gaiman New Girl Rabbits spring Veronica Mars