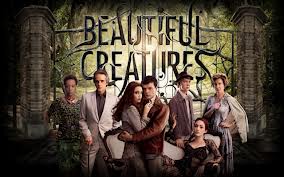 It's going to be impossible not to compare this to Twilight, as it's now virtually impossible to differentiate any Young Adult Novels from the original Big Three of Harry Potter, Hunger Games and Twilight.  However, I thought here, the casting was fun, not to mention, intriguing (who casts Jeremy Irons and Emma Thompson without some expectation of them bringing class to the role) and the cinematography and production design combined to make a thoroughly watchable, if predictable film.  Alden Ehrenreich and Alice Englert are as charismatic as a studio bent on telling the supernatural girl meets down-home boy story will allow them to be and there's promise in both of these newcomers (unsurprising for Englert especially, given that her mom is Jane Campion) and, as a non-book reader, I will say I actually did get caught up in the story, enough to be surprised.  The majority of the film though is, essentially as the title tells you, beautiful people looking beautiful in gorgeous, haunted settings and filling the screen with angst.  For some reason, it just didn't feel QUITE as rote as I had expected, which is always a good thing.  Also, watching Emma Thompson and Jeremy Irons luxuriate in their Southern accents is a treat.

Definitely worth a rental if you're at all intrigued by the trailer:


Overall, it was OK, which is actually more than I had expected- 3 Stars
2013 Film Reviews Beautiful Creatures