On The Bookshelf-Ready Player One 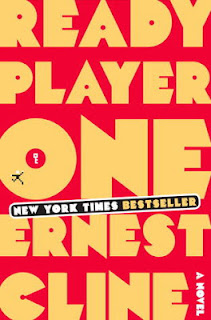 It may be that I'm just not inclined to be critical of a book that reads more like my own pop culture history textbook than a "great American novel" but I can't find an awful lot of fault with Ernest Cline's Ready Player One.  I'm sure there are plenty of reviews that you'll be able to find that talk about what the book is NOT; I'd rather focus on what it is which can be described several ways, but I'll choose the phrase "a fun romp through the past, present, and future of music, movies and video games, with a dash of dystopia to sweeten the mix" .
Since sometimes it's only possible to make a recommendation to others based on things you know they like, "Ready Player One" could easily be described as Ender's Game meets John Hughes and together they have a baby who is the subject of the documentary "The King of Kong: A Fistful of Quarters".  This is, of course an over-simplification of the novel and comparing artistic endeavors to other artistic endeavors is inevitably a terrible idea, still, there it is.
Wade Watts (alliteratively named because his father believed it sounded like a comic book name) is a high school senior in a dystopian future where the virtual world has taken over the lives of the Earth's population, and in doing so, the actual planet fall to pieces.  Wade exists in a world where trailer parks are now essentially trailer-scrapers, literally trailers packed on top of each other, called, well, stacks. Outside of city areas, the world described is something out of Mad Max and people rarely, if ever, leave their homes, except to go to work, if they're lucky enough to have a job.  However, Wade actually LIVES in a world known as the OASIS, a virtual reality game that has grown more than anyone would have guessed. When the co-creator of this world, a Steve Jobs-ian recluse named James Halliday dies without heirs, the future of the Oasis is called into question.  However, Halliday has left strict instructions that the person who will control his estate will be the winner of a game he has designed, a hunt for a video game Easter Egg inside the Oasis. Wade and other Egg Hunters, or Gunters, begin the long search for clues to lead them to the ultimate prize.
The world of "Ready Player One" may take place in the future, but what's interesting about the book is that it's entirely reliant on references to the past.  As I said before, it's a dream read for a pop culture addict.  Halliday, it turns out, was a pop culture junkie; what else would happen to a socially inept child of the Eighties?  As such, the Gunters find themselves addicted to researching Halliday's obsessions, becoming pop culture aficionados by default.  It seems as if each page is filled with a reference to a song or a band or a film or a video game, making this an easy novel to relate to.  Just don't make a drinking game out of the references, you'll never get past chapter five. I'm not sure if it's just me, but in literary terms, the most obvious comparisons for the novel are Ender's Game and The Westing Game, both of which I love.  Maybe I should just stick to books with "Game" in the title.
The only criticism I might throw out there for the discerning reader, now that I've been thinking about the book for a bit, is that the villainous IOI corporation (the Google on Steroids baddies who have found a loophole in Halliday's will and are attempting to gain the Oasis for their own, inherently evil, plans)are a bit, well...flaccid.  They're there because it's better to have a novel with an antagonist and a protagonist, but as a reader, I never really felt that there was a danger that the bad guys would win.  Bad guys don't win in a book that is written by someone who adores the movie War Games.  It just couldn't happen.
That being said, I just had so much fun making a playlist of the songs mentioned and re-living my teen years of falling in love with John Hughes movies and, of course, virtually experiencing the world of the Oasis with Wade (yes, it's a clever commentary on escapism)that it'd be difficult for me NOT to recommend this to people. When you read, be sure to look out for all of the movie dialogue and undercover references, like naming Wade's love interest Samantha Cook (instead of Samantha Baker from Sixteen Candles) It's an easy read, but a satisfying one.