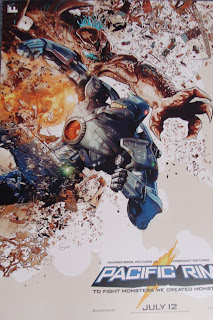 The super-ego part of me is saying "don't give this movie more than 3 and half. You should KNOW better" but there's a part of me that, if I was a 13 year old kid (the prime audience for a blockbuster anyway) again, this would be one of my favorite movies of the year.  Tell you what kiddo, we'll balance it out with an overall score of:

A lower score would seem to negate the beauty and scale of the battle scenes, but a higher score would indicate that intellectual analysis would reveal more, and I don't think it would.  Here, what you see is what you get, but what you pay to see, is probably exactly what you wanted to get.  Also, someone needs to start on those Hannibal Chow t-shirt designs ASAP.

Unknown said…
Ok, now that i have actually read your review, im more excited to see this movie. Also, now that ive commented on your blog, you cant say that nobody commented. Thank you/ Your welcome!
July 12, 2013 at 6:29 PM