On the Bookshelf: Beautiful Ruins

- October 14, 2013
I had been looking forward to reading this book since I first laid eyes on its cover.  A sun-dappled Italian hillside village takes up the entire front with font that insinuates a glamorous, wanderlust-fulfilling trip.  It’s an easy sell for a summer read.  I mean, are there people who don’t dream of driving down the winding roads of Portofino in some vintage convertible on a summer day?  If there are, I don’t want to meet them and I certainly don’t want to go on vacation with them.  While this book does partially fulfill that need for an Italian getaway, it’s much more than I initially had prepared myself for, and let’s face facts, any time a book has more substance than the cover conveys, it’s a win for the reader. 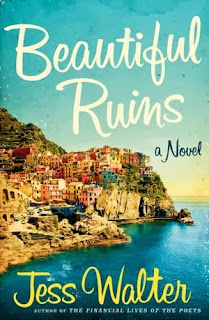 This isn’t merely a “life story”.  For one thing, it’s not simply about one person’s life, but in that kind of “butterfly effect” way that has become so popular, it’s a story about how the lives of several people are intertwined to make up one narrative.  Beginning in 1960s Italy, we’re introduced to Pasquale, a Florentine college student who has big plans to change his parents’ small seaside hotel into a tourist destination.  An only child in a small village (here, “small” is an understatement) Pasquale is a lonely child, with thoughts populated by dreams of one sort of fame.  On the other side of his port, in Rome, Elizabeth Taylor and Richard Burton are in town shooting the colossal Cleopatra.  Living up to his reputation, Burton has been letting his passions lead him astray, and has fallen in love with a background actress, Dee.  Dee, like Pasquale, is, as the phrase goes, young and full of ambition.  Those two things always seem to go hand in hand, don’t they?  Dee is in love the way only a young dreamer can be in love and so, when complications arise forcing her from the set of Cleopatra, she finds herself on the shores of Pasquale’s inlet hotel.

Flash forward to today, aging film and television producer,  Michael Deane is struggling to maintain a foothold, and cash hold, in a system that now only favors substance-less blockbusters and reality television.  His assistant, Claire, a mirror image of Dee, all neophyte chutzpah, is determined to bring integrity back to the film industry, all on her own, if she must.  And then there’s Shane, a screenwriter stereotype who is looking to make a name for himself by pitching a film based on the cannibalistic struggle for survival of the Donner party.   All of these characters, and more, slowly work their way towards each other through a series of life lessons, addictions, rehabilitations and ultimately acceptance, which, for the most part, make for an engaging read.

While most 75% of the novel is beautiful and contemplative, the last quarter mainly feels like a rush job, a bit overstuffed and contrite, although, I can’t complain about the very end.  That’s mostly because I’m a sap for an ending that, while not conventionally happy, is appropriate and acceptable, which, as the novel points out, is sometimes the most you can ask out of life.  While the generations-spanning story line is fun in that it makes for a somewhat unique point of view, the modern-day characters of Claire, Michael and Shane seemed uninteresting to me.  Far more inspired are the characters surrounding Dee Moray, which, its clear, is the beating, fragile heart of this story.  Dee and Pasquale become the ultimate representation of the road less travelled, the literary equivalent of asking "but, what if?"  The inclusion of the Hollywood aspect adds a bit of glamour, but, much like the industry itself, it's more style than substance, with less effort put in to that side of the storytelling.

There are small vignettes throughout the novel, pathways carved out that ultimately have no destination, but they are filled with the moments in life that matter.  Those characters, however brief of a moment is spent with them, seem more fully realized than some of the other "main" characters.

Spoiler alert:
My biggest complaint, however, is with Claire.  It's probably my own fault.  I automatically identified with her, mostly because I'm about her age and slightly interested/in love/obsessed with "FILM" and the reality of her situation just became a bit too real for me.  I wanted to still believe in a fantasy, but the fact that she ends up (in an haphazardly tagged on sort of way) with her porn/sex addicted boyfriend for seemingly no reason better than she was too lazy to test the waters elsewhere, was just too depressing for me.  But again, that's what sometimes happen in real life, so it's not a flaw in the storytelling.  It's just not the story I wanted told.

Then again, that seems to be the whole point of the novel.  Most of the times our lives don't end up telling the stories we want them to.  Sometimes we tell stories of what we wished had happened (to ourselves and to others) and sometimes our story is told for us, by whomever can.  But the lucky ones get to tell our own stories on our own terms, and even if they're not the fantasy, they're ours, and ours alone.

I know, it's a lot heavier than that 60s Italian summer cover would have you believe, right?