- November 16, 2013
*2nd Run Reviews are reviews for movies that are most likely out of theaters, and probably already available on blu-ray or on demand.  Sorry this year has been a bit too crazy for me to be exactly timely, but I still want to get something down on a digital page* 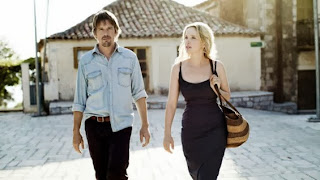 What I've loved about the previous 2 entries in the story of Jesse (Ethan Hawke) and Celine (Julie Delpy), Before Sunrise and Before Sunset, is the feeling that they're breezily authentic.  I know that may sound odd, considering how often films and their critics use "authentic"as a synonym for "gritty" or "depressing", somehow intimating that something is only genuine if it appeals to our base sentiments about humanity.  However, this trio of films has always chosen to focus on the opposite side of the emotional spectrum, concerning itself mostly with, well, love.  As the third entry, what Before Midnight does beautifully is shift that focus ever so slightly, if not always subtly, from a love story to a life story.

Before Midnight finds Jesse and Celine, as is the case with most of the people who have become fans of these films, mid-life, mid-love and, as inevitably follows those two credentials, teetering on the brink of everything falling apart.  Jesse and Celine are now the parents of twins, on a vacation from their daily lives and, as sometimes happens with people who have too much time on their hands, contemplating just what choices led them to the monotony of the life they're about to return to. Celine is about to start a new job, Jesse is still writing, while trying to be a father to his son from his previous marriage, which he's finding more and more difficult to do when he's halfway around the world. What unfolds over the course of the film is an examination of all of those things that make up our life: love, boredom, happiness, the greater good versus our personal desires.  I mean sure, these are things that have been explored in film before, it's the basis of all good drama, but the success of Before Midnight rests solely on the audience's involvement with these characters, as well as the personal charms of Hawke and Delpy and their incredible chemistry.

As is the case with its predecessors, Before Midnight is, essentially, one, long meandering and brain-warpingly great conversation.  But then again, depending on who you talk to, the same thing could be said about life in general.  That doesn't mean it isn't infinitely interesting.  As someone who was 12 when Before Sunrise came out (and probably 14 when I saw it, thanks Blockbuster in Meriden) their story appeals to my nostalgic core.  Ironically, the one thing that this trio of films has never felt is nostalgic.  They've always felt firmly planted in the present; movies that are about making decisions in the moment.  What Before Midnight does so well is track the consequences, intended and unintended, of those life-changing decisions we make in those moments where we either seize the day or let it pass.

The fairy tale aspect of the first two movies has always been their endings, where Jesse and Celine became the people we all WISHED we could be all the time. They're people who seize the big moments in life, they get off the train, they kiss under the stars, they're late for their planes.  But in their conversations about their everyday thoughts, they're pretty much just like us (or at least that section of the audience that has kept coming back to their story), but they're our idealized selves.  What happens in Before Midnight is the death of that idealism.  It's uncomfortable and sad, heart-breaking and hopeful all at the same time, which is why this might be the best entry in this trio of films so far.  It's the logical follow-up to the grand notion of Jesse choosing to be with Celine.  In all of the romance of that moment, there was a real life that he left behind and, unlike movie endings, that real life didn't end when he made that decision.

In a way, these films remind me of a fictional version of Michael Apted's UP documentary series, which has checked in with the same group of children every 7 years since the age of 7.  This is our 9 year check in with Celine and Jesse and, of course they've changed.  That's what life is.  Now they have to decide whether they can change together, which is always the tricky part.  The romantic notions of love are gone.  Now it's carpools and scheduling and, if you're lucky, some of the lusty spark that used to be there to get you through the nights.

There's never been any question as to the rapport that Delpy and Hawke exude between each other sharing the screen.  In fact, part of what I love about this film is that it's clear that these are two people/characters who are entirely at peace with their bodies and their physical connection. All of the awkward "but will he like me in the morning" is gone, and in a way, the sexiness is gone to.  That does NOT imply that the chemistry is gone.  All I mean is that it's clear that, at this point, these are characters who are not concerned with physically impressing each other.  They're more concerned about finding the time to work with what they've got.  They've just hit the comfortable plateau.

It's interesting then, that the most intense scene of the film comes during what's supposed to be a "romantic getaway" at a hotel. Before they can even finish undressing, they begin verbally sparring with each other. It's an "are we going to make it?" kind of conversation and it's ugly.  It's painful to watch someone realize that their hopes, the things that we cling to in the farthest recesses of our brains even when we tell ourselves we're cynical, are no more than lingering remnants of a past that no longer has much bearing on their present.  You know that moment where you first realized your parents could argue?  Where the facade fell away for a moment and you saw them, finally, as two distinct people instead of a couple?  That's what happens here, and because of the emotional investment, the fight seems even more like a gangrenous gash instead of a paper cut.  As always, the open ending presents itself again, as a conclusion this chapter, but, by no means an end to the story.

While the emotional resonance of this film is deeper than with the other two, I would still find myself watching the other two first,  if only for those fairy tale endings.  At my heart, I'm a sucker for feeling like everything will still work out the way I want it to, even if that's not the same thing as things ending the way they should.  Before Midnight ends the way it should, but not the way the audience at large might want it to, which is, as I said before, what makes it authentic.

Overall 4.5 out 5- see it for the characters you've come to love and, as always, for the dialogue and postcard worthy walks through dreamy locales.
2013 Film Reviews 2nd Run Reviews Before Midnight Ethan Hawke Julie Delpy