- November 18, 2013
I was a senior in high school when I read Ender's Game for the first time.  It was recommended to me by someone I (still) trust implicitly and it changed my mind about the entire genre of Science Fiction.  Up until that point I had refused to acknowledge that I was **that** kind of nerd.  I mean sure, I was geeky in plenty of ways, but I always stayed just behind that line, which I considered at the time, to be passing into unforgivably geek territory.  Then I read Ender's Game and thought, well I suppose there's no going back now.  I had no idea of the controversy that would later be created, and really, since I wasn't looking for it, no inkling that there was any sort of subtext to the story in general.  To me, at the time, it was a novel about humanity's inability to understand the universe and interesting thoughts on the corrosive dangers of war on innocence.  But then again, I've always thought, perhaps I'm a bit too naive for my own good.  So fast forward  many years later, and they've finally managed to adapt the book in to a movie.  And the good news is the movie isn't terrible as far as adaptations go.  The (somewhat) bad news is that there's enough cut out from the novel to give me pause. 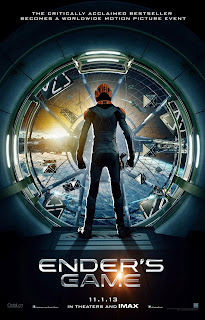 I found it interesting that the very first thing to appear onscreen is a quote from Ender himself.  Seeing the attribution "A.E. Wiggan" at the bottom is perhaps the biggest indication that this is a film that is mostly aimed at the fans of the book and is much less concerned about gaining new fans through the film.  They're not going for the general audience grab the way most blockbusters would these days.  I'm curious to know if people who hadn't read the book saw the quote and thought "who the heck is A.E. Wiggan?  We didn't read him in English class?" or if they just rolled with it, assigning more meaning to the quote because they had no idea who said it, until halfway through the film.  Any audience new to the material is completely at the mercy of somewhat incomplete context clues, which is always the case when you haven't read the source material, but here feels somehow more like a disadvantage than usual.
Andrew Ender Wiggan (Asa Butterfield, Hugo) is a "third", in a futuristic society where couples are normally only allowed to have 2 children.  However, the Wiggan family is different.  All of the children are brilliant and because there was the possibility that a third Wiggan child could be the militaristic messiah the government was hoping for, they granted the family permission for a third.  You see, Earth was attacked years ago by an alien race known as the Formics (giant ant-like creatures) and millions died as the Formics attempted to colonize. It was only thanks to the efforts of Mazer Rackham that the planet survived.  Now Earth has to find new ways to defend itself.
As it turns out, Ender is the perfect combination of Wiggan genetics.  An individual at war with himself, Ender is torn between his older brother Peter's reliance on violence and his older sister Valentine's overabundance of compassion.  He is first and foremost a strategist though, clinging to his reasoning in a way that adds a coldness to his innocence.  Years in Earth's military program, which has become dependent on the imagination of the youngest generation, hasn't done much to dissuade this instinct.  Ender is as much a product of military experiment as he is human.  In a way, he was born to fight.
After receiving the news that he is admitted to Battle School, which is located off-planet, Ender must begin rigorous training to become the best of the best.  This training mostly takes the form of battle games.  Think of Battle School as Space Station camp and the battle games as intensely serious rounds of capture the flag, only with your career success on the line instead of just say, cabin cleaning, or something.  I don't know, I never went to sleep away camp.
Pushed by both his superior officers who supervise his training, namely Hiram Graff (Harrison Ford) and Major Anderson (Viola Davis) and his squad mates, Ender continues to test the boundaries of what's possible when it comes to a fight.  He is able to see strategies that no one else can see because his understanding of the goal is so singular.  When he is finally promoted and put through his final test at Command School, he discovers, things aren't all what they seem, not just at school, but with the universe as a whole.
I can say this for sure, the cast is really the best I could have hoped for in an adaptation, and I do think that Asa Butterfield embodies Ender in a way that very few could have.  Any of the robotic aspects of the performances, not just of Ender but of the cast in general, I blame not on the actor's but on the fact that, as an adaptation, we aren't allowed to go inside the character's mind the way the book does.  These are military characters and, while sometimes a little over the top or simplistic for me, a certain stereotype is followed to convey just what sort of state humanity is in.  Instead of being privy to Ender's thoughts as we are in the novel, most of those musings are conveyed via voiceover of his emails to his sister, and as we all know, voiceovers carry their own issues within films.  Additionally, the production design is top notch.  The Battle Rooms looked great, and accompanied by a score that was successful in emotionally manipulating me, the game sequences were worth every penny.
However, large chunks of the novel, mostly having to do with Peter and Valentine's exploits on Earth have been completely excised from the story and pretty much all of the supporting characters are one-dimensional.  It's sad because there are moments when the capability of great
acting is shown, particularly from Viola Davis (who's awesome all the time) but much like Ender's missions, the story is simplified to the objective of just watching Ender win. There is little question as to the outcome of the movie throughout, and this lack of anticipation combined with the fact that most of the characters have little going on beneath the surface leads to a flatter experience than I would have liked.  The end does offer an interesting reflective moment, but it doesn't pack the punch that it might have had the investment in Ender's emotions been more present throughout.

Overall: 3.5 out of 5-great cast, great look, but that leaves character development pretty low on the list.