- November 12, 2013
It's no secret that, well, pretty much everyone I know and respect is eagerly anticipating the return of the master detective when Sherlock returns to PBS early next year (January 19th, to be exact).  By the time he's back on U.S. screens it will have been more than a year since we last saw him, curiously alive and kicking.  Well not really kicking, but you know, scowling a bit and, I guess, magnificently brooding would be the term that I'm searching for.  Either way, he was alive in the scene directly following the one in which we all watched him plunge to his supposed, and very bloody, death. 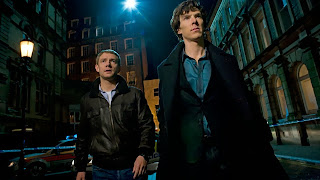 I'm not claiming that I'll solve Gatiss and Moffat's riddle (because that's what this is...and remember, Sherlock supposedly HATES (?) those); I'm certainly not filled with THAT much hubris.  But I do love a good conspiracy and I just thought I'd take this preparatory time to catalog the events in The Reichenbach Fall that may or may not matter.  Certainly, there are probably events that happen in several of the previous episodes that may be called back, once the explanation has been revealed, but for now, all we theorizing nutsos have to go on that's confirmed is this quote from Mr. Moffat:

"I’ve been online and looked at all the theories," Moffat told us, "and there’s one clue that everyone’s missed. It’s something that Sherlock did that was very out of character, but which nobody has picked up on."


1. At the beginning of the episode (around 5 minutes in) he ignores his phone.  Upon hearing the alert, John says to him "it's your phone" and Sherlock simply answers "mmmm...it keeps doing that".  Actually in that same exchange there's another foreshadowing of this episode when Sherlock says (of the hanging dummy) "oh Henry Fishguard never committed suicide, Bow Street Runners, missed everything"

2.  Mycroft mentions a 1972 political scandal, which seems to refer to this dealing in which Home Secretary Reginal Maudling was forced to step down after corruption allegations came forth regarding his property dealings with architect John Poulsen.

3. I could be just looking for things, but with the exception of people who have come to him with a case, have we ever seen Sherlock interrogate a witness as he does Ms. McKenzie at the boarding school?

4. Again, reaching, I'm sure I'm reaching, but the moment where John is telling Sherlock he should have gone with the police because he doesn't want people thinking Sherlock is a fraud, he confronts him shouting "CAN'T YOU SEE WHAT'S GOING ON?!" The last time he lashed out at John was in the Baskerville episode when he was trying to tell him he was scared.

5.  There's the constant emphasis on I O U.  When he meets Molly in the lab and she asks him "what do you need?" he doesn't respond with "i need you" he just says "you".  What if it's more like "U" as in part of a code or some such nonsense. More fodder, I know, but speculation is fun! Again in his confrontation with Moriarty he says "I don't have to die, if I've got You" and then he tells Moriarty "I am You". I told you, when my "read into things" glasses are on, I see something in everything, so grain of salt > this thought.

6.Then there's the phone call to John, the insistence that John continue looking at him.  "this phone call, this is my note" and then he tosses his phone, seemingly destroying it, before the serious splattering.

Everything that happens after that is in the realm of speculative "how".  Does the bike messenger who knocks John down dose him with some of the Baskerville serum or has he been dosed ahead of time? Are the  people surrounding Sherlock part of his homeless network, in on the cover up?  Was Mycroft in on it?  Did he and Sherlock set it up?   Who knows, there's literally nothing that would surprise me with Sherlock, especially as played by Benedict Cumberbatch.  At this point, I could watch Sherlock TURN INTO Smaug and say "yup, see, he's a dragon, that's how he survived".  So, needless to say, my breath is beginning to bate as we speak in anticipation of January 19th (which, of course, is also the return of Downton Abbey).  Any theories anyone wants to share?  Feel free to comment, if you do!