- November 19, 2013
In the realm of comics and adaptations of said media, I still consider myself a neophyte.  I was too busy watching John Hughes movies and reading John Grisham books (because they made me feel like an adult) in my teens to give much consideration to the graphic novel. While I'm doing a bit of catching up on the history, as extensive as it is, my progress is slow more than steady. By and large, I'm still at the mercy of the film adaptations and fan reactions when it comes to tone or canon-approved story lines.  To be honest, I only care that a story be interesting, not necessarily receive fan-based approval.  All that being said, my knowledge of THOR was pretty much "uhhmmm yeah, I think I've heard of that guy" when the first movie was released.  It's place in The Avengers Phase One character stories ranked 3rd, behind Captain America and Iron Man.  It lacked the stylized beauty of Joe Johnston's directing and neither of the romantic leads had the charisma or chemistry of Stark and Potts, but it was a decent entry.  Most importantly, it had Loki. 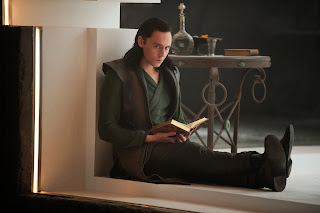 Being a single girl in her t.....ies (age will remain hidden to protect the underachieving) who spends her free time writing about various forms of media instead of jumping on the Match.Com boat, OF COURSE I love Tom Hiddleston.  One of the many Fit Brits that the UK has been gracious enough to share with the rest of the world (including, but not limited to, Benedict Cumberbatch and Ben Whishaw) Mr. Hiddleston, is, in plain speak, a freaking star.  It's nearly impossible to focus on other things going on onscreen while Loki is also occupying space.  While there was some Asgardian history happening in the first THOR, most of the story was really a vehicle for setting up The Avengers, and I found a lot of the time spent on Earth between Thor and Jane Foster a bit bland.  Chris Hemsworth and Natalie Portman didn't seem to have that immediate spark I needed to believe their connection; but then again, I am watching movies where men go gallivanting around in capes with hammers and shields and techno-powered suits, so maybe I should just cool my jets.


I long ago (really, like 2 years ago) accepted the fact that everything will have a sequel, or a trilogy, or, if the studio can squeeze two more bucks of  babysitting profits out of a willing 14-year-old, a tetralogy (yes, it's a word, I promise) and as such, my resignation to this fact has left me rarely going in to any continuation with giddy excitement, only the cold resolve to get through it, unless the film can prove something to me. Luckily, Thor: The Dark World was up to the proving challenge.

Picking up very close to where The Avengers left off, Loki  is imprisoned for his crimes against humanity. In case you were renting a subterranean rock last year, what that really translates to is he threw a galactic temper tantrum when he found out he probably wouldn't be king, enlisted an alien race to aid in his revenge,  leveled New York City, and was then air lifted to Asgard to face justice, without ever having to pay one cent to New York for damages, which is weird because New York is pretty adamant about their property taxes. So with Loki in jail, Thor sets about returning peace and justice to the 9 realms by, well waging war on them until any disagreeing factions surrender.  You know, the typical first world leadership plan.

Back on Earth, Jane is still busy being a physicist when she isn't too occupied pining after Thor.  She's followed Erik Selvig to London because he's getting some strange readings.  In between all of that working she manages to find time to fit in a lunch with the always charming Chris O'Dowd.  What follows next is a statement that many will claim is just jealousy, because, well it is, but: What the heck is it about Jane Foster that has dudes literally crossing the universe to be with her?  While she's looking for the red-caped one, the universe is busy planning it's convergence which only happens every 5,000 years.  If you ask me, there is a decided lack of enthusiasm on Earth about The Convergence.  I imagine that if the planet had known The Convergence was happening, at the very least Ryan Seacrest would have hosted a television special and there would have been Convergence parties with paper tiaras and a ton of collectible Convergence tee shirts."I Survived the Convergence, and all I got was this decimated city" comes to mind as a slogan.

What follows is a lot of talk about how the fabric of the worlds is pulled apart because The Convergence is causing it, Jane picks up a case of The Aether (that's what I'm calling it, yes, a case of The Aether) in which she basically gets mercury poisoning cubed, Thor has to save her, brings her to Asgard, and all of the Dark Elves who have been waiting for this perfect moment (the awakening of the Aether + The Convergence) to plan their own Welcome Home party finally come out to play.  They lay waste to Asgard, and then Thor brings Loki in to help plan out a revenge.

There's a decent amount of set-up here, but it all pays off.  The chemistry between the cast has increased a lot since the first installment and this script is much funnier.  It walks an excellent balance in tone.  There are plenty of serious moments, I mean, it is subtitled "The Dark World" after all, but it shines in its humorous moments.  Two easy moments to recall involving a minimally clothed Selvig who claims "I'll get my pants" when the shit's really about to hit the fan and the always showboating Loki simply announcing "TA DAAA" when he maneuvers a boat through a rather tight-fitting portal.  All you dirty-minded folks keep your innuendos to yourself! Both moments of understated humor that give you a sense of what your in for.

I felt more emotionally invested and more satisfied story-wise than I did with Thor.  I actually am curious as to what the next step in this story is, which again, is more praise than I'd give the first.  To borrow from The Avengers, the first Thor felt a bit like dress rehearsal while in The Dark World Loki's full-tilt diva comes home. All of the actors seem more comfortable in their character's skin, which is always beneficial.  I'm not sure if Alan Taylor's directing alone is to be credited.  Kenneth Brannagh is a phenomenal director, but I think here, the story is just richer.  The characters are already established, allowing for a more involving plot.  Also there's a part where Rene Russo becomes a Viking Ninja Warrior Princess and it is awesome.