- March 06, 2011
Let me put this simply: The Phantom of Pemberley might very well be one of the worst books I've ever completed.  I've never been the kind of person who could simply give up on a book.  I figure that there are plenty of things in my life that I procrastinate on/don't follow through with that I can't add books to that list.  Books are usually a nice, engaging form of distraction, at the very least, a minor form of obsession when they capture me at the right time with the right story or style. The Phantom of Pemberley was severely lacking in all aspects.
Before we get into all of that though, I feel, for some reason, like I should explain the thinking behind me even picking up such a book.  I was wandering around one of the two major book retailers remaining in business and, despite my already lengthy to-read list, I was insistent that I wanted something new.  I should have just turned around and walked out, but really, who does what's best for them?  No, instead I found myself slowly picking up the book solely on the mention of the word "Pemberley", clever marketing as such a title probably works on the vast number of Jane Austen fans in the world.  The idea of the growing number of Jane Austen fans is really a separate discussion in and of itself, but I would venture to say that the number of "sequels" and "inspired by" novels with the aim of imitating or making money off of Ms. Austen's style are almost a sub-genre all by themselves.  I've read a few that have been successful, by my standards, like "Mr. Darcy's Daughters" and, let's face it, when the Seasonal Affective Disorder starts to kick in in early January, sometimes you just want something comforting, and so I fell for the old "you like Jane Austen, you'll like this" idea.  I was duped, or perhaps, I duped myself.
At the outset it seems like something that should be entirely appealing.  The summary on the back claims to be written in "Regency style and including Austen's romantic entanglements and sardonic humor".  It states that it's a "suspense-packed sequel to Pride and Prejudice".  It basically reads like it should be what happens when Austen meets Agatha Christie.  What's not to like about that?!  On second thought, don't answer that question.
The inherent problem in all of these kinds of novels is that, well, they're not written by Jane Austen, and so, as much as someone might attempt to copy her style, they're not her with her nineteenth century sensibilities.  What ends up being churned out by Ms. Jeffers, the author of The Phantom of Pemberley, is some horrifying cross between a romance novel and a sub-par mystery, with full snippets of Pride and Prejudice ideas and dialogue bandied about as if it were an original take.  It's not.  I feel like, in the reading elitist part of my soul, this is the kind of book that Jane Austen subtly mocked in Northanger Abbey.  It's not gothic, perhaps, but it is overly romanced.
I find myself in a quandary.  I consider Pride and Prejudice to be one of the greatest love stories of all time, mostly because it's not simply about love.  It's about all of those things that go on in life that conspire against love happening.  It's funny, it's embarrassing, it's real.  None of that exists here.  It's decidedly unrealistic, although it is embarrassing, to me, that I've read it.
I suppose my biggest gripe is that Elizabeth and Darcy have somehow been morphed into the uberest of uber-couples, not only in love, but living solely for one another.  It's ridiculous, in a way.  These are actual quotes from the book:

Of Darcy: "Without Elizabeth in his arms, he felt bereft of life-she had imprinted herself on his soul" (p.240)
Elizabeth speaking this time: "We have an undeniable connection- a oneness that spans the universe"

Are you kidding me?!?!  The Elizabeth Bennett that has always existed in my mind would read lines like this and laugh.  "Imprinted...on his soul"?!  That's some Twilight crap.  Not to mention the fact that on at least one occasion I marked the use of the word "totally" as in "I had totally forgotten" (p.177)  Really?  "Totally"?!  As in "that dress looks totally awesome on you"?!  When did the Darcys move to Sun Valley?  But all of this pales in comparison to the ultimate explanation of who the killer is, so beware, SPOILER ALERT is on, starting now: 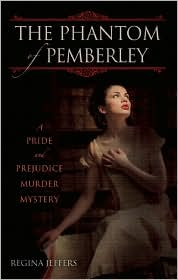 I usually don't do this, I usually encourage lots of people to read the books and maintain the suspense of a novel, especially of a murder mystery, because, let's face it, the suspense is the best part.  Even now, I'm torn, but I can't really help myself:

The murderer is a certain rakish George Wickham...but it's not really because it's Wickham with Multiple Personality Disorder.

Yes, you read that correctly, George Wickham gets the Sybil treatment where one personality includes a Scottish character which allows for some "interesting" dialogue, to say the least.

I'm not certain whether this would have all been so offensive if it hadn't dragged on for more than 400 pages.  Like I said, ultimately I can't blame Ms. Jeffers for probably being a legitimate Austen fan, and I don't blame her for wanting to turn a profit on the Austen fandom.  I do blame her for turning it into a soap opera.  Or maybe Pride and Prejudice was that generation's soap opera.  Maybe I don't know anything, but I do know that I'll probably never read this book again.

Stars: 1-because I don't feel ok giving any book a zero, and the parts of Pride and Prejudice that were lifted I enjoyed reading again.